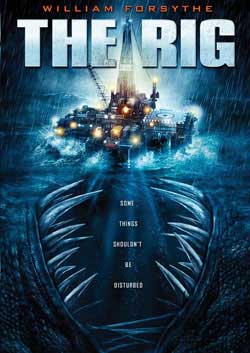 As a hurricane rages outside, the small but experienced crew of an oil drilling rig settles in to ride out the storm. Isolated on the rig, their calm is short lived when a crew member goes missing and an extensive search proves futile. Slowly, they discover that a deadly creature is stalking the skeleton crew, eliminating them one by one. Surrounded by nothing but raging ocean, their communication severed and no way off the rig, the roughnecks try to survive the stormy night with an unrelenting force of death hunting them down.

Stop me if you heard this one…. A ship or in this case oil rig out in the ocean drills into the ocean floor exposing and releasing a purple glowing entity sea creature. The creature makes it’s way up to the rig which is now approaching a serious level of storm activity. Much of the crew heads back leaving a core crew to take care of any remaining business. The team is helmed by Jim (William Forsythe), the teams chief in charge with  a variable crew of wise guys, tough chicks and rough neck workers. Beauty Serah D’Laine who plays Carey, the chief’s daughter and girlfriend to the teams conflictive role of Dobbs (Scott Martin ). The teams world is one of an oil riggers life complete with its perks and problems from staying out on the ocean for too long.In that respect they meld pretty weld as a ensemble collective. A subplot story has older brother Freddy in a conflict with his younger bother Colin. Colin wants a transfer to better escape his brothers shadow so that he can make a better impression in his career. Jim runs a tough crew expecting alot form his workers. Though it doesn’t help that is daughter is dating one of them much to his disapproval.

While I will say that the production quality of “The Rig” is satisfactory, the concept and premise is poorly over redundant. In fact from the cover I was expecting more of a giant sea creature which I think would have been more fun, though what we get is a combination of “sleet stacks” and combo creatures from “Feast” that lurk in the shadows killing off crew members one at a time. I do like monster films and regard several ones as horror favorites. For instance films like “Deep Rising”, “Deep Blue Sea” and even the reality based film “Open Water”,  I really liked. Though there wasn’t enough here to hold my interest in the threat. In fact, you might recall the premise of “Deep Blue Sea” being of the same. A rig, approached by a storm while the monsters make there way thru the occupants.

I makes me wonder if the studios are trying to capture a demographics based on past concepts or just have run out of script ideas entirely. Even at a 90 minute mark, the action of the film seemed to drag on with so many repeat scenarios that every scene became a long haul until the end. We know from the start what to expect and that’s the biggest problem for me. We know that the sea creatures will get killed off in the end. We know most will perish except for a maybe a last 1 or 2 survivors and we know that the threat will never really be explained leaving us at just that weird creatures live under earth’s core which we shouldn’t disturb. Yep all that to look forward here.

“The Rig” in these respects turned out to be  big disappointment offering nothing new into the horror genre that had any memorial quality to it. The creatures were kept mostly obscured for good reason and seemed to be not much more than a modernized oil version of the “Creature from the black Lagoon”. If you really have a yearning for more sea creature films that kill crews then jump all over this ditty. 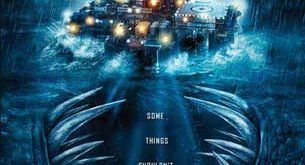 The Rig: DVD art and details