Moon Beasts and Moon Mercenaries: Looking Back at Werewolf By Night #32

Both Werewolf by Night and Moon Knight are coming to Marvel’s live-action productions. The debut of Jack Russell, The Werewolf, comes after a lengthy delay. A film version of Werewolf by Night saw an official announcement in 2005, and promotional material even made its way to public buses. The project ended up shelved, though. Now, Marvel Studios wants to expand tap into its old horror library, so here comes The Werewolf.

The arrival of Moon Knight, however, is a stunner. Comparisons between Moon Knight and Batman would lead you to believe Marvel courts litigation from DC Comics/Warner Bros. Then again, the “new” version of Moon Knight is different from the one that debuted in Werewolf By Night #32  (August 1975).

Moon Knight soon comes to life in an upcoming Disney+ project, but no details exist about The Werewolf’s confirmed eventual appearance. It could be on film or via streaming. 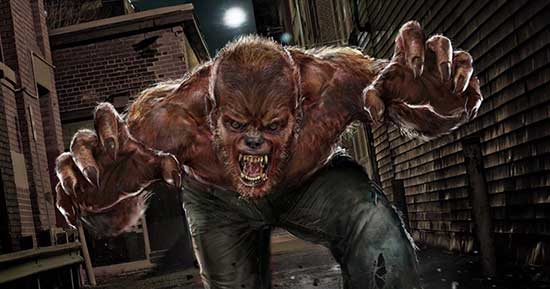 With both characters soon to gain, hopefully, mainstream acknowledgement, perhaps it is time to walk backward past the newsstand until we come across an ancient spinner rack featuring the venerable Werewolf battling a new and formidable foe.

In the early 1970s, Marvel decided to publish a series of horror comic books and magazines. Tomb of Dracula was the number one book with Werewolf by Night sitting in the number two spot. Virtually all the Marvel horror titles were excellent and featured outstanding writing and artwork. The books, unfortunately, didn’t sell, and many faced quick cancellations. The brilliant Werewolf By Night series lasted only until issue 43. The time wasn’t right for horror comics, apparently. Maybe the Universal-inspired monsters were outdated by the mid-1970s, as horror films moved into newer, more explicit directions.

Werewolf By Night started as a pure horror comic book that occasionally weaved in superhero elements. By the end of the series, Jack Russell ceased to suffer the curse of lycanthropy and could control his powers. The desperation attempt to turn The Werewolf into a hero failed. The slow burn in this new direction started earlier. Roughly a year previously, the creative team gave him an intriguing new supervillain/antihero to fight: Moon Knight. 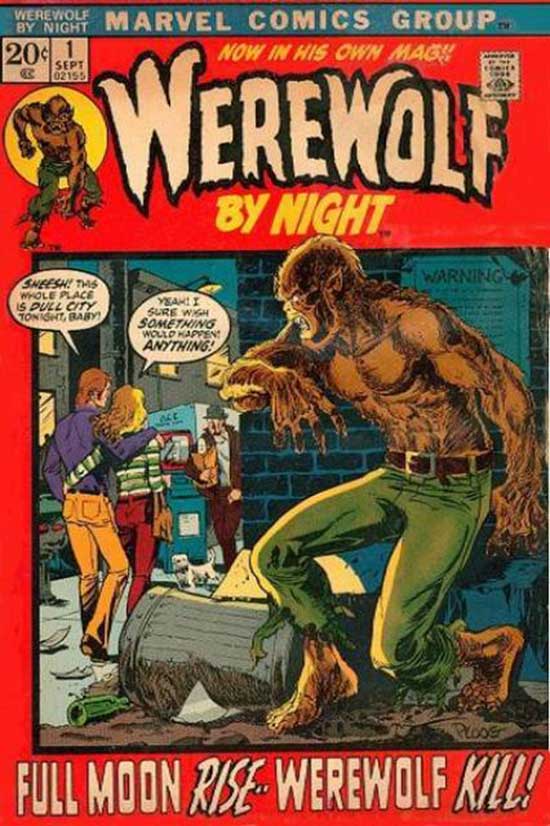 In the 1980s, comic book readers could check out the “Mile High Comics” back issue advertisements to see scores of books in the $2 range. And then there was Werewolf By Night #32 with a $30 or so price tag. Collectors wanted that first appearance of the strange cult character who almost took down The Werewolf.

On Werewolves and Moon Knights in the Bronze Age

Jack Russell, The Werewolf, debuted in Marvel Spotlight #2. The character proved popular in this “tryout” book and received a monthly series after a handful of appearances. Readers lucky enough to acquire those first issues know that Jack Russell’s family lineage carries the curse of the werewolf. Upon turning 18, Jack Russell stalks the streets of Los Angeles on the nights the full moon rises. Is there a cure for the curse? Jack Russell does his best to find out and battles evil monsters and humans alike along the way.

After poor sales led to the series’ cancellation, the story of The Werewolf went on a long hiatus. Jack Russell, The Werewolf, appeared infrequently and wasn’t given a chance after chance with a new book. Moon Knight was luckier.

A detailed explanation of Moon Knight to those unfamiliar with the character would be lengthy, convoluted, and beyond confusing. Let’s say the character went through lots of changes. 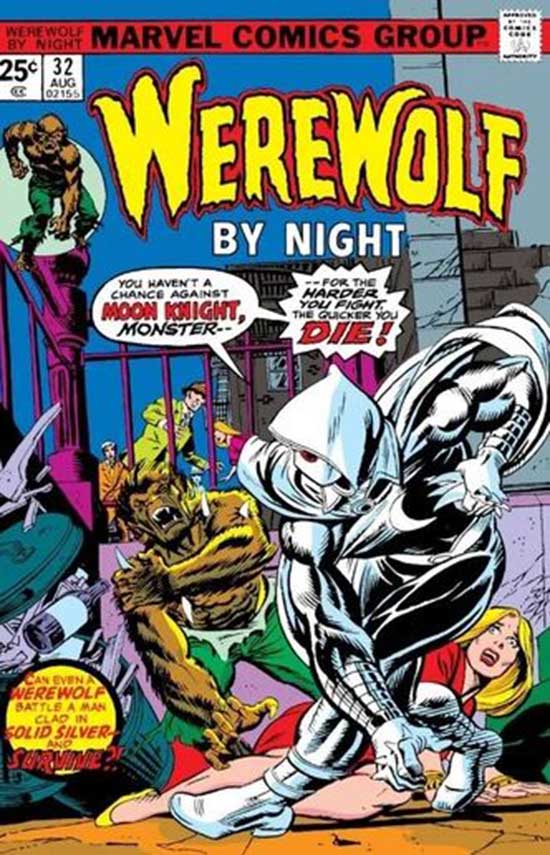 During the Bronze Age of Comics, Moon Knight developed a reputation as “Marvel’s Batman knock-off.” The description wasn’t far off from the truth. He had gadgets mimicking the moon, like Batman’s mimicked a bat, and one of his alter egos was billionaire Steven Grant. And that was only one alter ego. Moon Knight, whose real name is mercenary Marc Spector, had three secret identities. When not Steven Grant or Marc Spector, Moon Knight dug up clues as cab driver Jake Lockley.

In costume, while Moon Knight had very, very Batman-like powers and abilities, although he would gain strength with the cycles of the moon thanks to The Werewolf’s scratch. As convoluted as this sounds, Moon Knight’s life story would continue to get even more convoluted as the years passed. (We haven’t touched on the Egyptian God Khonshu or issues surrounding multiple personality disorder) While somewhat ersatz, Moon Knight’s Bronze Age books did feature excellent stories.

Since the focus here centers on The Werewolf’s book, let’s not go too far into detail about Moon Knight. We’ll treat the character as if it’s late 1975, and we’re all discovering Moon Knight, and maybe The Werewolf, for the first time.

“Can even a WEREWOLF battle a man clad in SOLID SILVER and SURVIVE?”

The answer to the question posed on Werewolf By Night #32’s cover lies inside its pages. Of course, we know The Werewolf comes out on top of his predicament. How he does so is the intriguing part (and the selling part) of the cover.

The subconscious of Jack Russell muses, “Nobody messes with a dude dressed in fur, claws, and pure mean” and ponders why Moon Knight attacks The Werewolf on the issue’s splash page. Moon Knight doesn’t have too difficult of a time battling The Werewolf on the first few pages. The masked character sports Cestus gloves, spiked gloves from the Roman Empire, and these gloves are made of silver. One wallop does a number on the title lycanthrope. Forget about steel-toed boots, as Moon Knight’s savate kicks deliver a silver-toed boot.

The opening pages represent a flash-forward. The action shifts from the alley-way fight to earlier in the day, and picks up from the previous issue’s events. (Side note: issue 31 was one of the more shocking WBN stories ever)

Writer Doug Moench would later go on and write solo Moon Knight stories and scores of other works, including Batman at DC Comics, did a brilliant job here. He immediately establishes Moon Knight as a formidable foe who is neither clearly a hero or villain. Readers who picked up issue #31 know The Werewolf mauled Jack’s best friend, Buck. Is Moon Knight here to hunt down The Werewolf for justice’s sake, or is he a villain with other nefarious purposes. A setup like the one Moench crafted keeps readers hanging on every page for the answer.

Upset that he may have killed Buck, Jack Russell rushes from the hospital to his father’s house, where he discovers an oddball character dressed up in a silver, mask, hood, and cloak. 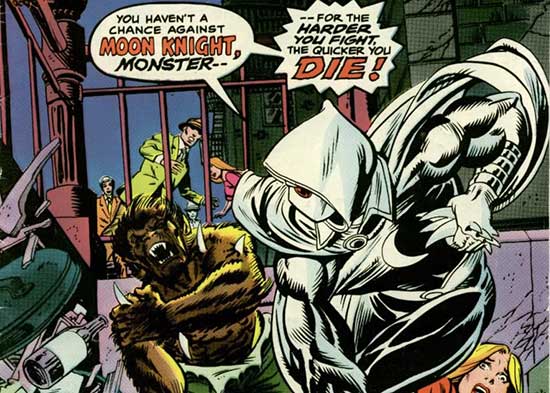 “Hello, Russell. They told me to announce myself as The Moon Knight…pretty stupid name.”

The odd way the antihero announces himself adds more mystery to the story. Moon Knight remains a character of mystery, but his reference to “They” infers he works for some group. Who?

We get the answer right away. Lengthy narratives weren’t the norm in 1975, so we learn that “The Committee,” a secret organization wishing to capture The Werewolf, hired mercenary Marc Spector to do the job. They even provide him with a new superhero/antihero/villain costume and accompanying gadgets for the job.

Russell, not surprisingly, turns into The Werewolf, and the action moves to the flash-forward at the beginning of the issue. A helicopter soon arrives, as does Frenchie, Moon Knight’s version of Alfred. Frenchie goes on to kidnap Russell’s girlfriend, Topaz, while Moon Knight does the unthinkable. He knocks out The Werewolf!

The issue ends on a cliffhanger with Moon Knight dragging the unconscious Werewolf to the copter. Moon Knight’s so confident in himself that the mercenary never ties The Werewolf up!

Just as The Werewolf received a tryout in Marvel Spotlight, it looks like Moon Knight received a tryout in this book. He clearly isn’t a full villain, and the appearance of Frenchie seems like the Marvel team was building for something in the future. Then again, sometimes, characters become more popular than everyone thought. The Punisher and the Silver Surfer debuted in Amazing Spider-Man and Fantastic Four comics, respectively. In time, they received their own monthly books. 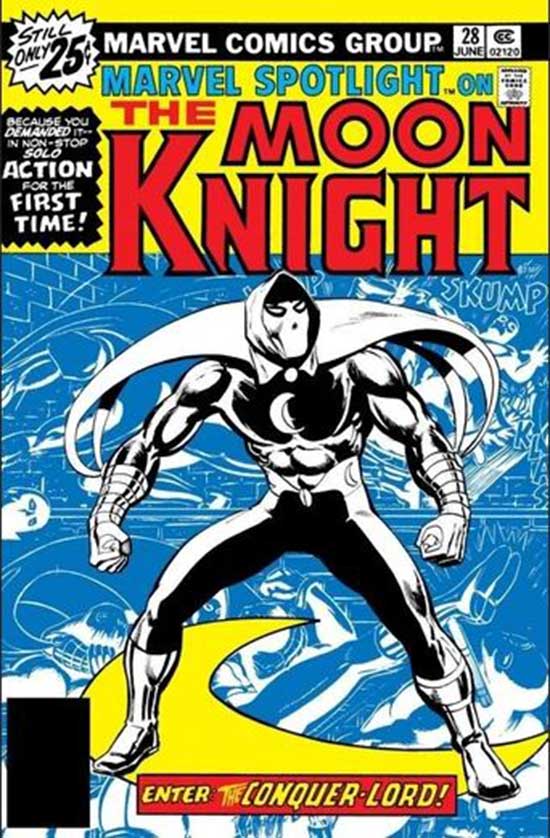 Ironically, Moon Knight would move onto The Werewolf’s old book, Marvel Spotlight, for three more try-out issues. Then, he would appear in The Defenders and Peter Parker, The Spectacular Spider-Man before, curiously, getting solo stories in The Hulk! Magazine. Writer Doug Moench and artist Bill Sienkiewicz both did outstanding work on these stories. Marvel eventually gave Moon Knight a monthly series in 1980, but it didn’t last long. The series concluded after 38 issues.

The Full Moon Sets on Werewolf By Night

Werewolf By Night was 11 issues way from cancellation when issue 32 hit the stands. Overall, the series maintained a focus on horror and presented outstanding art and storytelling. Sales weren’t great, and Moon Knight represents an attempt to create a bridge to traditional superhero/villain fans. The trend towards conventional heroes and villains harmed the title’s quality level and, likely, alienated horror fans.

And the price went way up since those 1982 Mile High Comics ads.