THE ASCENSION OF AVA DELAINE 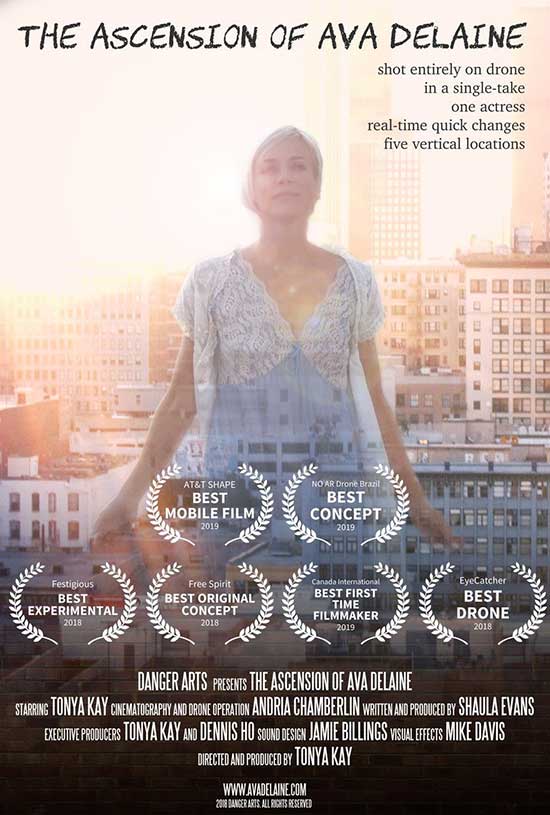 Shot entirely on drone. In a single-take. With just one actress. Spanning five vertical locations. The Ascension of Ava Delaine is a technical pioneer in filmmaking from director and horror icon Tonya Kay (D-RAILED, EVIL BONG 777, GIRL ON THE THIRD FLOOR), and is now available on Amazon Prime through Hewes Pictures.

This 5:07 min experimental short film has been called a “Ridiculously Difficult Single-Take Filming By Drone” by SolidSmack tech journal. The Ascension of Ava Delaine also received the honor of Best Mobile Film at the AT&T SHAPE Film Awards – a conference exploring the convergence of technology and entertainment. Director, Tonya Kay, accepted the award which included mentorship with Cathy Yan (director; Birds of Prey), a grand ceremony at Warner Bros Studios and a bountiful cash prize.

Director, Tonya Kay, whom has also been cited as one of StudioDaily’s Exceptional Women in Production and Festigious’s 30 Female Directors to Follow, and who’s work includes tv segment direction for Ripley’s Believe It Or Not! (The CW), also executive produced and acted in the film. Kay says, “Everyone has seen single-takes performed horizontally – even on a drone. I wanted to challenge the technology and give viewers something they’ve truly never witnessed before: a story-based single-take that travels vertically – voyeuristically meeting our actress on a new floor, in new wardrobe, in a new decade of her life, with new emotions in real time.”

On being the actress tasked with four quick-changes while traveling up stairs during the single-take, Kay says, “What you see from the drone front is the movie. What was happening behind those walls was a whirlwind of rambunctious nudity and focused determination.”

The story of The Ascension of Ava Delaine, written by Shaula Evans, is a female empowerment fantasy, non-verbally showing a woman becoming more confident, more sexual and more valuable as she ages. A story not traditionally told in mainstream media.

The Ascension of Ava Delaine is available now via SVOD on Independent Shorts Awards TV, Opprime and on Amazon Prime.