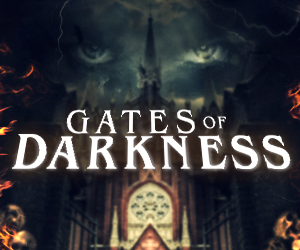 Presenting thew Debut of the trailer for Gates of Darkness

It’s been years since the Tade twin’s father ran out on his family. Their mother has remarried, and Michelle (Mary Mouser) is adjusting well to her new stepfather and stepsister (Alisha Boe of Netflix’s 13 Reasons Why.) But her twin brother, Stephen (Randy Shelly,) is becoming more rebellious and distant, haunted by remembered fragments of a traumatic past.

As those fragments take shape, Stephen begins to suspect that his father never abandoned them, but had run afoul of diabolical forces. When his grandmother commits a shocking act that exposes the sins of their close-knit Catholic community-overseen by the imposing Monsignor Canell (Saw’s-JigsawTobin Bell)-those same forces come for him. If he is to survive, Stephen must do battle with the supernatural powers of darkness raging in his Church, in his family, and in his own heart.