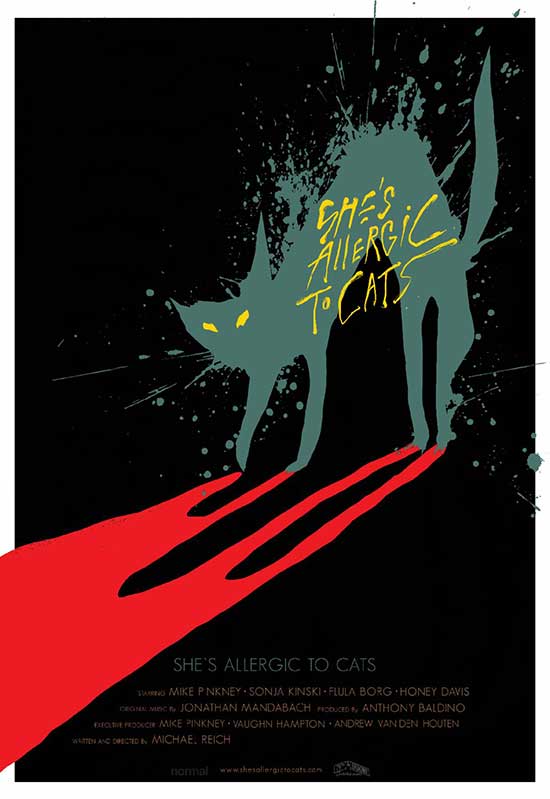 “funny and confounding and adorable and gross all at once” — Birth.Movies.Death

She’s Allergic to Cats is the debut feature from music video director Michael Reich. The film is based in large part on his own experiences of life in Los Angeles. Reich spent years grooming dogs, documenting the underground punk scene, directing music videos for My Chemical Romance, The Shins, Bad Religion and Ryan Adams, as well as appearing as a body double for the gold robot in Daft Punk. The film was produced by his longtime collaborator turned lead actor Mike Pinkney and veteran genre producer Andrew van den Houten (The Ranger, Sadistic Intentions). She’s Allergic to Cats co-stars Sonja Kinski (latest member of the Kinski acting dynasty) and Flula Borg (“Conan”, James Gunn’s The Suicide Squad.

Mike Pinkney stars as Michael Pinkney, a stifled creative artist eeking out a living in Hollywood as a dog groomer. When the girl of his dreams (Sonja Kinski) walks into his shop, he falls down a rabbit hole filled with surrealist detours and melancholic absurdity. She’s Allergic to Cats had its world premiere at the Fantasia International Film Festival, where the festival’s co-director Mitch Davis hailed it as an intoxicatingly insane breath-of-fresh-air. The film went on to screen around the world at the Oldenburg International Film Festival, Vienna’s /slash Filmfestival, Sydney Underground Film Festival, GenreBlast, WhatTheFilm Fest, and Ithaca Fantastik, where it took home the award for Best Film.Michael Pinkney (Pinkney) is a dog groomer living in a rat-infested Hollywood dive with dreams of a bigger creative life. His current ambition is to raise funding for an all-cat remake of Carrie. At home he makes what he refers to as “weird video art that nobody wants to watch”. One day on the job, he meets Cora (Kinski) the girl of his dreams. “When you’re cutting their nails, is it supposed to bleed that much?”, she asks, as he stares at her lovingly. Easily distracted, creatively in knots and now in some sort of love, Michael’s about to embark on a whole new dangerous trip.