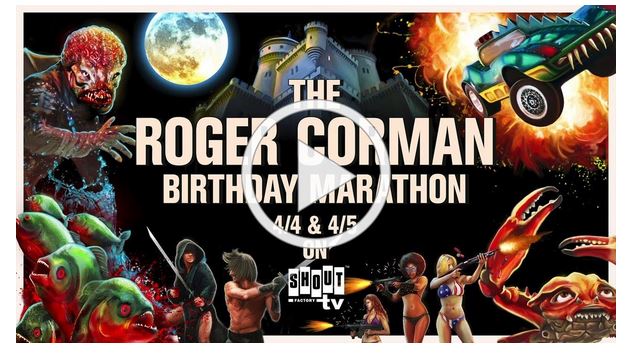 Shout! Factory TV celebrates cult film icon Roger Corman’s 94th birthday with a weekend-long marathon livestream April 4 and 5. The marathon will present notable Corman films such as The Wasp Woman, Attack of the Crab Monsters, Chopping Mall, Crazy Mama and many more, alongside every episode of the Shout! Factory TV original docuseries Cult-Tastic: Tales from the Trenches with Roger and Julie Corman. The 13-part series about the life and work of Roger and Julie Corman provides viewers an extraordinary look inside the Cormans’ cinematic universe and features extensive in-depth interviews.

In Cult-Tastic, the Cormans draw upon their vast filmography and footage from over 130 films spanning seven decades. Within each episode, the legendary filmmakers share insightful stories and defining moments from their movies, recall talent and young filmmakers they fostered, as well as provide behind-the-scenes perspectives on how they produced some of the smallest budget films that went on to achieve box-office gold.

One of the most prolific and successful film producers in the history of cinema, Roger Corman’s impact on modern American film is prodigious. Referred to as “the King of the Cult film” and “The Pope of Pop Cinema,” Corman has produced more than 350 films and directed 60 others. Honored with an Academy Award for Lifetime Achievement in 2009, Corman continues to reign supreme as one of Hollywood’s most masterful and influential filmmakers.