Home | Mondo Macabro’s and CAV’s May 2020 Release of SATANICO PANDEMONIUM – From Bride of Christ to Slave of Satan!

Mondo Macabro’s and CAV’s May 2020 Release of SATANICO PANDEMONIUM – From Bride of Christ to Slave of Satan! 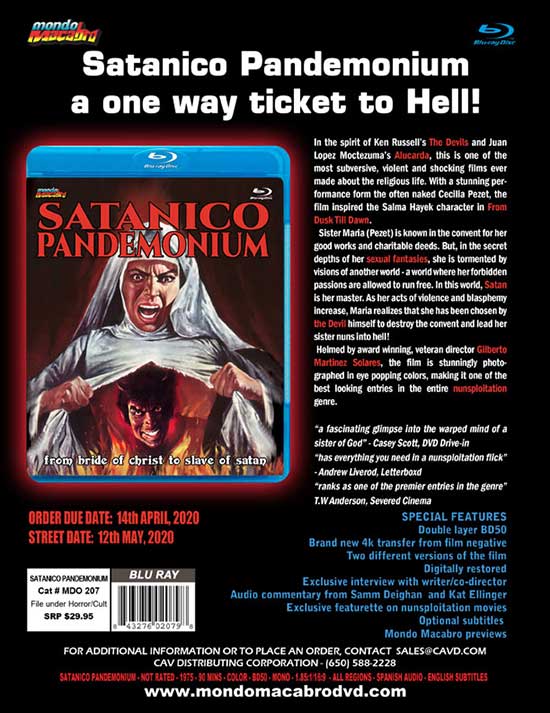 In the spirit of Ken Russell’s THE DEVILS and Juan Lopez Moctezuma’s ALUCARDA, this is one of the most subversive, violent and shocking films ever made about the religious life. With a stunning performance from the often naked Cecilia Pezet, the film inspired the Salma Hayek character in FROM DUSK TILL DAWN.

Sister Maria (Pezet) is known in the convent for her good works and charitable deeds. But, in the secret depths of her sexual fantasies, she is tormented by visions of another world – a world where her forbidden passions are allowed to run free. In this world, Satan is her master. As her acts of violence and blasphemy increase, Maria realizes that she has been chosen by the Devil himself to destroy the convent and lead her sister nuns into hell!

Helmed by award-winning, veteran director Gilberto Martinez Solares, the film is stunningly photographed in eye-popping colors, making it one of the best-looking entries in the entire nunsploitation genre.