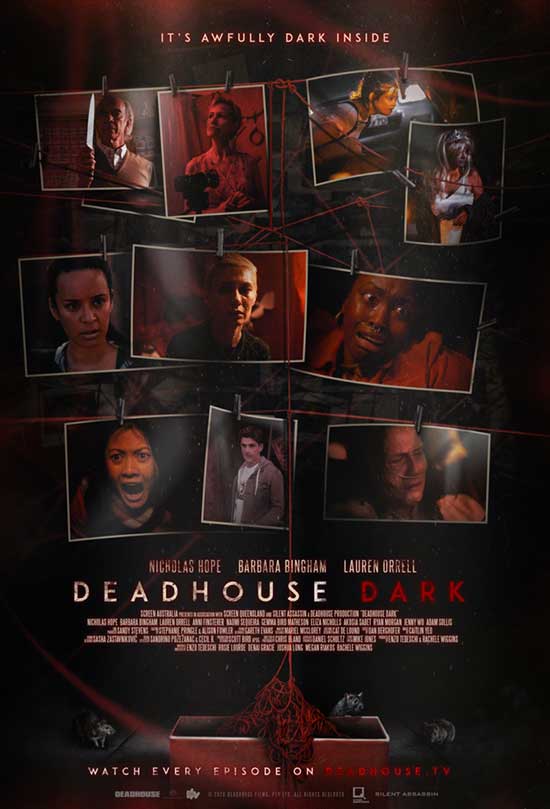 Australia’s only 2020 CANNESERIES Horror Short Form contender has just been announced out of Cannes, France – Deadhouse Dark, created by Australia’s own horror mastermind Enzo Tedeschi, will be the nation’s only entry in the globally recognised Short Form Competition at this year’s CANNESERIES which takes place from March 27 to April 1.

CANNESERIES turns the spotlight on new, promising and innovative formats, which reflect current and new ways of watching series.  A world-renowned jury including Gale Ann Hurd (The Terminator, Aliens), Stewart Copeland (The Police), Jamie Bamber (Battlestar Galactica, Law & Order: London) and Erin Moriarty (One Life to Live, True Detective) will watch an international selection of new high-quality series.  The award of Best Short Form Series will be handed out during the festival’s Closing Ceremony which will be broadcast on Canal +.

With principal funding from Screen Australia, support from Screen Queensland and Silent Assassin Films, Deadhouse Dark has been specially developed for an online audience, with a release slated for later this year via YouTube and Enzo Tedeschi’s horror platform, www.deadhouse.tv

An anthology of six interconnected horror short films, Deadhouse Dark is anchored by a woman who receives a ‘mystery box’ from the dark web, each item within it gradually unveiling a dark and troubling truth.

Showrunner Enzo Tedeschi writes and directs Nicholas Hope and Barbara Bingham in ‘A Tangled Web We Weave’, an online dating encounter that turns a little dark – with a rodent twist.

Rosie Lourde directs Naomi Sequeira and Eliza Nicholls in the unsettling ‘Dashcam_013_20191031.mp4’, which she co-wrote with Enzo Tedeschi.  The episode tells the story of two young girls that encounter a bloody and deserted car crash on a remote country road.  The episode is told completely from the perspective of a car dashcam.

‘No Pain No Gain’ written and directed by Megan Riakos and starring Gemma Bird Matheson, inspired by the real-life Blue Whale suicide challenge, tells the story of a competitive runner desperate to win at any costs.

A group of online-fame hungry mystery hunters venture down ’The Staircase’, written and directed by Denai Gracie, to face what lurks in its supernatural darkness. Stars Jenny Wu, Ryan Morgan and Adam Sollis.

‘My Empire Of Dirt’ tells the tale of a ‘death midwife’ played by Akosia Sabet who is tasked with helping Anni Finsterer’s Grace ease into a peaceful death despite being haunted by her past.  Written and directed by Sitges Best Short Film Award winner Joshua Long.

Established in 2018 by an independent association chaired by Fleur Pellerin, the CANNESERIES festival aims to promote and highlight series from all over the world and become the voice of this modern, popular and ultra-creative art.

Drawing its energy from the very heart of the world-renowned city of Cannes, the festival takes place in parallel with MIPTV (The International Content Market for the Future) a must-attend event for industry professionals.

CANNESERIES aims to promote its core values of excellence and diversity in a fresh, modern and glamorous way.

Its goal is to bring together top talents from the series industry, to reveal the talents of tomorrow and to create an international competition that is an unmissable annual rendez-vous for series spanning all genres and formats.