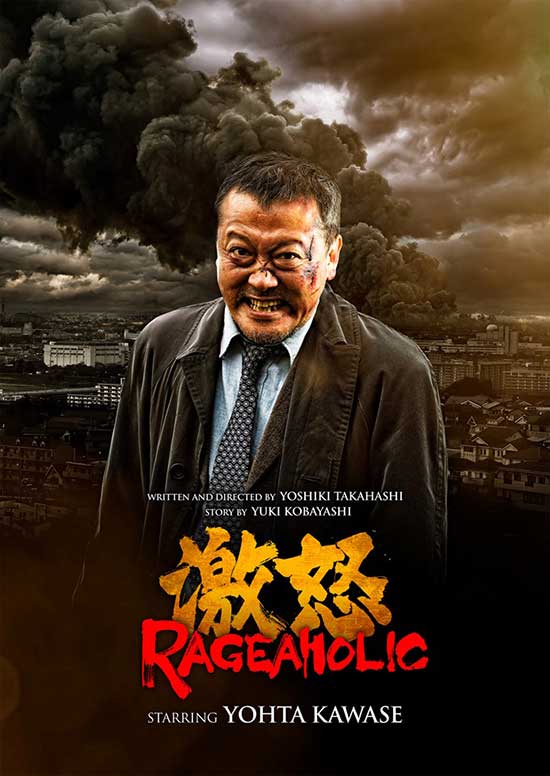 RAGEAHOLIC follows Yakuza-busting police officer Fukama (Kawase), who, after allowing his overly-violent nature to get the better of him, botches an arrest and leaves several bodies in his wake. Disgraced and sent to America for psychotherapy, he returns to Japan years later to discover that the town he once cleaned up is now so clean that it has literally become sanitized – with death as punishment for those who do not conform. And as he realizes how dangerous this ‘sanitation’ truly is, the rage inside him returns with a bloody vengeance.

Says writer/director Takahashi, “The idea behind the film came from the increasing exclusionism and thirst for a ‘sanitized society’ in Japan. Being a social outcast in Japan means you’re targeted to be alienated and excluded. The social unrest in my home country is becoming alarmingly high, and citizens are getting more and more protective. The ‘safe society’ they now demand looks, to me, like an Orwellian dystopia, and inspired me to make a caricatured film about it.”

Principal photography on RAGEAHOLIC began on February 13th in the Tokyo suburbs of Saitama Prefecture, where a sequence involving a tense hostage situation was shot. The following day, the production moved north to Gunma Prefecture, where the remainder of the picture was lensed. It eyes a late 2020 festival and theatrical bow.