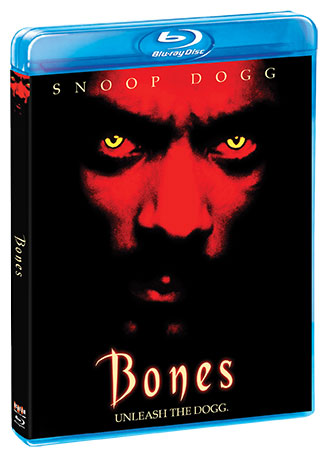 The fun and campy Bones, starring the one and only Snoop Dog, will be released on Blu-ray™ on March 31 from Scream Factory. An impressive list of special features includes a new 4K scan from the negative, and new interviews with the director, screenwriter, director of photography, and special makeup effects artist.

The time is 1979. Jimmy Bones (Snoop Dogg, Training Day) is respected and loved as the neighborhood protector. When he is betrayed and brutally murdered by a corrupt cop (Michael T. Weiss, The Pretender), Bones’ elegant brownstone becomes his tomb. Twenty-two years later, the neighborhood has become a ghetto and his home a gothic ruin. Four teens renovate it as an afterhours nightclub, unknowingly releasing Jimmy’s tortured spirit. It’s thrills and chills when Jimmy’s ghost sets out to get his revenge.