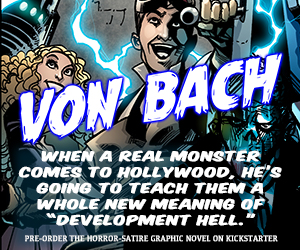 The Next Arena Theater Company produced Von Bach — a play about an undead monster who sues a movie studio trying to make a horror movie about him. Now, playwright Owen Hammer is adapting the story into a graphic novel.

Doctor Heinrich Von Bach was the nineteenth-century scientist resurrected from the dead by his own ungodly invention. Today, a major studio is finishing a big budget “Von Bach” movie. But suddenly, the real Von Bach returns to life in Hollywood and he is going to teach the cast and crew the true meaning of “development hell.”

The story will cover the original, incredible events that happened in Bavaria in 1888 and also the events in present-day Hollywood. Additionally, we will see clips from all the famous “Von Bach” films that have shaped the culture of the main characters. The story takes place in seven chapters, each one a twenty-page comic.

Hammer is seeking funding for issue 1, but will publish all seven issues if he receives sufficient funding. For a minimum of $5 you can essentially pre-order your copy of “Von Bach” on Kickstarter and ensure that the book is made.

The campaign launches on Tuesday, February 11th at 7AM PST “Von Bach” is a satire that pokes fun at pop culture and society in general. Nonetheless, there is a powerful story about the search for meaning and the struggle for one’s own dignity. And of course, some genuine scares!

Owen Hammer has written for stage, web series, comic books and the occasional TV pilot. He has written extensively for the Next Arena, including one acts. This will be his first long-form graphic novel. The Next Arena is a nonprofit theater company based in Los Angeles. They have produced “Von Bach,” “Vonnegut USA” — a play adapting the works of Kurt Vonnegut, “Vincent” — Leonard Nimoy’s play about Vincent Van Gogh’s brother, “The Increased Difficulty of Concentration” — Václav Havel’s absurdist comedy and many other shows including avant grade original productions.