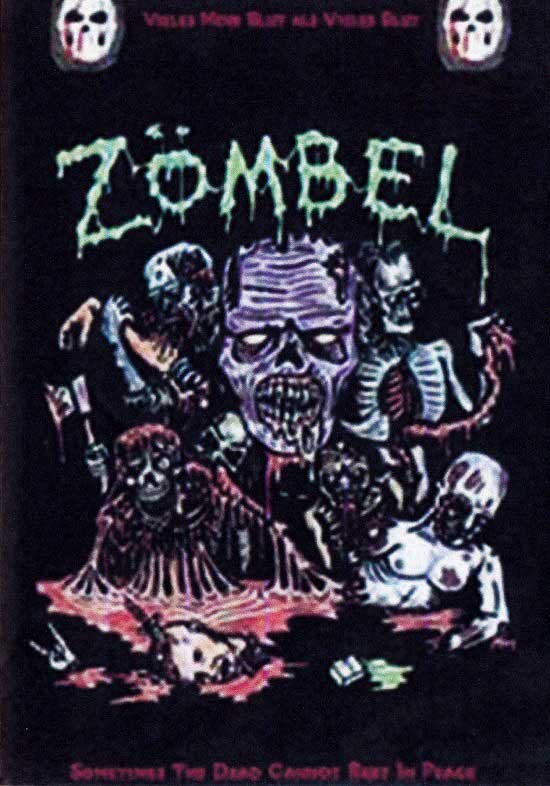 A mad scientist named Psöicheldoc has developped a serum that can bring the dead back to life. His evil plan to conquer the world with an army of zombies by his side gets suddenly interrupted when a group of young metalheads decide to make a stand. And so the “Brunstelwald-Massacre” begins…

Calling out to fans of shot on video, low to no budget horror films – I’ve got a rare one for you to track down. 2001’s Zombel is the silly, bloody, made for a song and a dime German splatter film you’ve been looking for. Well, it’s from Switzerland, so technically the “German” label isn’t accurate, but it feels like it belongs in the same conversation as movies like Jochen Stephan’s Blutnacht 1 & 2, Utz Marius Thomsen’s Knochenwald trilogy, Andreas Bethmann’s Dance of the Pumpkinhead, and early Andreas Schnaas films like Violent Shit and Zombie ’90: Extreme Pestilence. That’s the “more heart than talent” conversation, the one about young gorehounds in the early days of home video cameras who decided that renting horror movies wasn’t satisfying enough, so they got up off their couches and made their own. This is the DIY generation of horror filmmakers who easily made up for their lack of know-how with an abundance of determination, and some of them even went on to make a name for themselves in the genre. 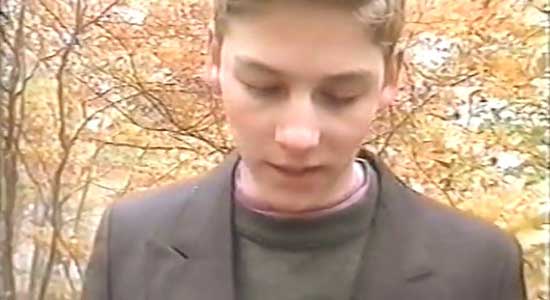 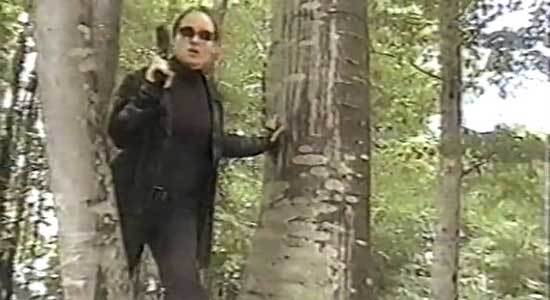 Right from the start, Zombel feels like a fun movie, one belonging to the “zombies picking off random wanderers in the woods” subgenre. You can just imagine this group of friends meeting up at the designated area, video cameras and fake blood and six packs in tow, all set to shoot a movie.

This one begins with a mad scientist-type doctor cutting off his own hand, then pouring a bottle of “zombel” on it to re-animate it. After an opening credits sequence full of gory drawings straight out of a bored high school student’s notebook, we meet up with to the next set of victims/characters wandering the woods on a collision course with the undead: There’s a lost tourist trying to read a map, a dude who sneaks out to the woods to smoke weed and masturbate, and a group of friends drinking beer (what else?) in the woods, among others. While the story is pretty sparse on details, and there’s a lot of loose ends left flailing in the wind, the attraction here is the various ways in which these characters, and the multitude of zombies, meet their bloody ends. 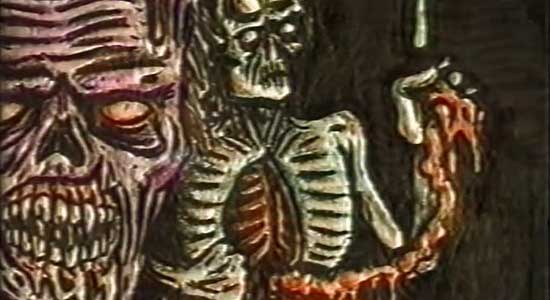 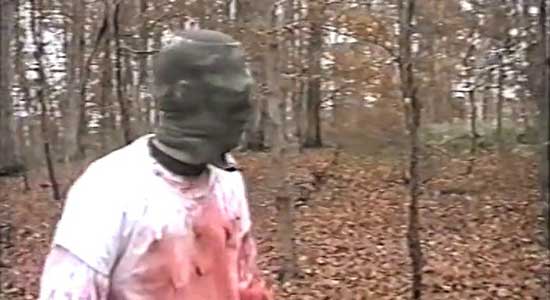 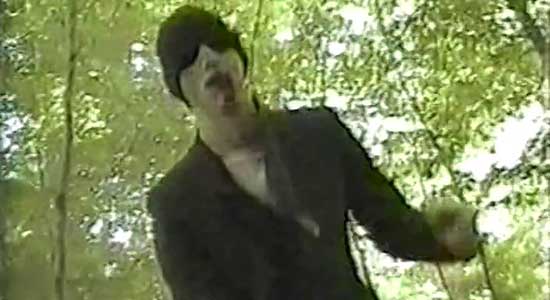 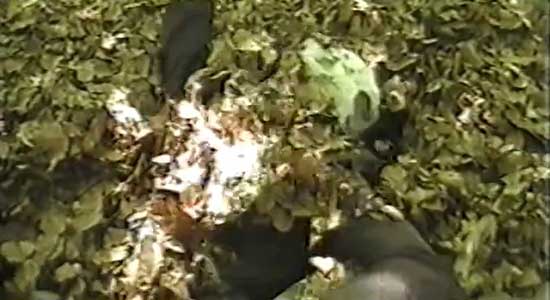 Al Spicher is the man of many talents responsible for Zombel (and the inevitable sequel, Zombel 2). He is the writer, director, editor, makeup/effects creator, and no doubt producer of this passion product. The end credits mention that cameras were operated by everyone (and that their were no stuntmen used), but I have to imagine that much of this movie was a joint effort amongst the core cast. These guys make a small cast seem bigger by donning make up, wigs, sunglasses, and masks to become new characters, which is simple but effective. The effects are basic, none of them looking all that amazing, but they get the job done within the miniscule budget these guys had to work with – we’re probably talking part time job money and loans from parents here. It’s a wonder this movie even saw the light of day… 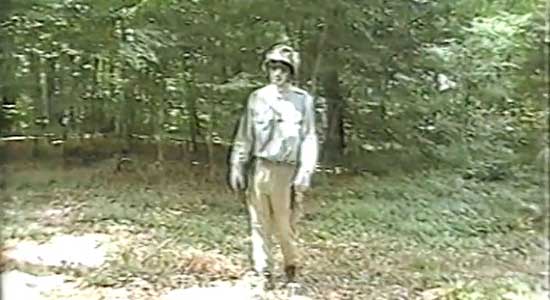 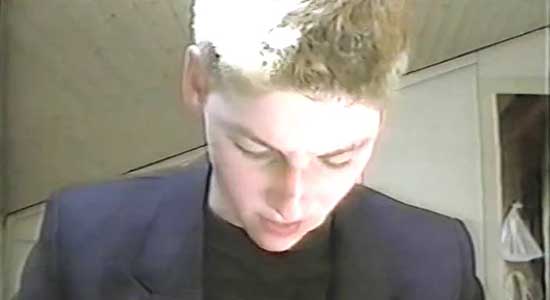 No, for real, if you’re able to track a copy of this movie down, keep this in mind while you enjoy it: Spicher never intended for this to be seen by any of us. I talked to the director in hopes of getting some English subtitles, and he told me that not only did they never create any subtitles, but they never released this movie. This is a movie made for fun to be shown to friends, but someone who got a VHS copy must have distributed the movie on DVD (illegally, I might add). 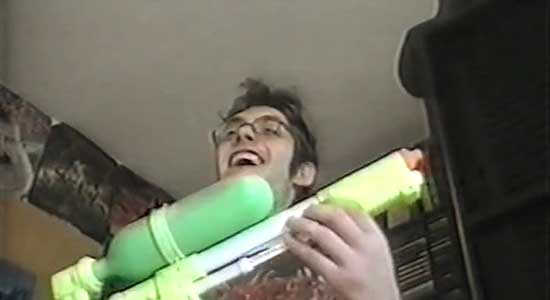 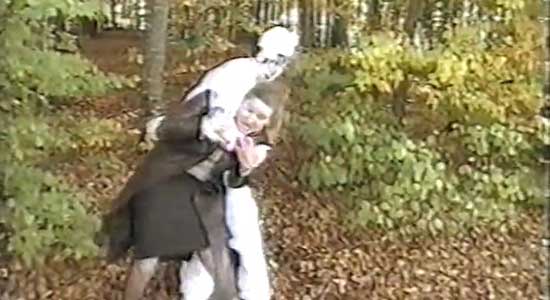 There doesn’t seem to be any anger about this, he’s happy that people have enjoyed his films, but he’s had nothing to do with any of them making their way out into the world. And that all makes sense, and kind of makes Zombel that much more fun. It’s a rare gem, a bonus, for any of us who get to see it, and so all of the plot holes (which, to be fair, might be cleared up if not for the language barrier) and all of the bad acting and so-so effects should be taken with a grain of salt. This is very far from perfect, but if you’re a fan of German splatter, shot on video horror, or just bloody goofy zombies, ask around to see which of your friends have a copy of this movie, because it’s a fun one!