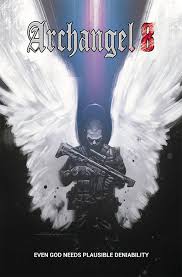 Synopsis:
In a world beyond the sight of mortals, Heaven and Hell wage war for the souls of mankind. Principal among God’s legion are seven archangels written about in religious texts for millennia. But there is an eighth archangel, known only from passing allusions in Apocrypha, who operates under a different code. Fighting without God’s sanction, he faces the enemy on his own terms, and shows just how bad good can be.

Artists Writers & Artisans (AWA) is a comic book and digital media publisher, owned and operated by creators, founded by Marvel alumni Bill Jemas and Axel Alonso, along with Jon Miller, the former CEO of News Corp. Fully funded by James Murdoch and Lightspeed Venture Partners, AWA has some of the biggest names in comics and film, such as J. Michael Straczynski, Reggie Hudlin, Garth Ennis, and Frank Cho working to craft new worlds, characters, and stories for a 21st Century audience. Find out more about our work at AWAStudios.net.

Upshot is an imprint of AWA. Made up of creator-owned stories and a shared universe for the 21st Century. The shared superhero universe, is led by the upcoming release “The Resistance.” Upshot Studios larger shared universe – led by AWA Chief Creative Officer Axel Alonso – will offer stories outside of the superhero tradition