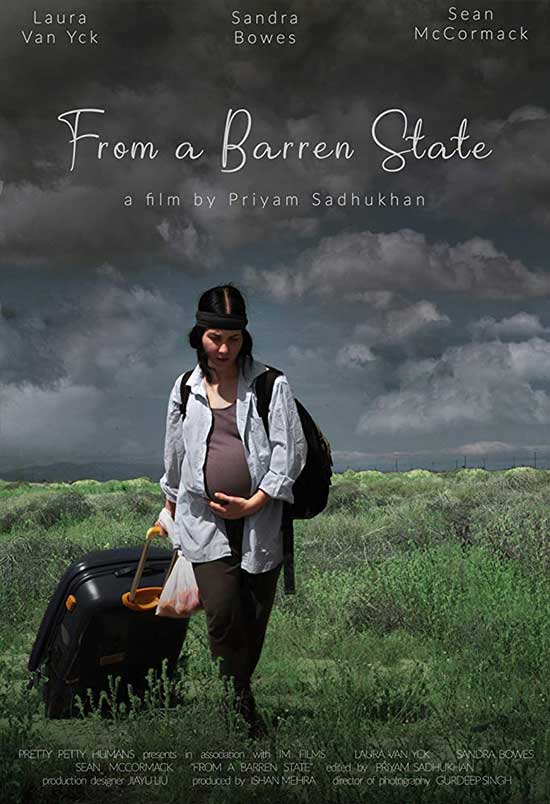 From A Barren State states from the beginning when you think things are to good to be true, they are. This short was written and directed by Priyam Sadhukhan. We are set in desolation  woman that had it all and lost it all. She had a home with her boyfriend in the desert. Unmentioned circumstances causes the woman to lose everything except for her unborn child. She takes of through the desert with a suitcase and no where to go. She is found by a man that takes her in with his wife. For a time everything seems great until the story unfolds.

The short film features performances by Laura Van Yck, Sean McCormack and Sandra Bowes. The gracious hosts take in the pregnant woman on the terms that she has to go as soon as she has the baby. The married couple were unable to conceive so this act of hospitality was a more sinister plan from the beginning. Our mom to be is kept under lock and key and watched by the wife relentlessly. As contraction come closer she devises a plan. After faking that her water broke out main character takes the opportunity to attack the wife and try for her escape. She mortally wounds the wife and heads out for her get away when her water actually breaks. Now its a matter of time before the husbands comes home and the baby cant wait. Leave it spoiler free at that.

From A Barren State is intriguing in ways but leaves a lot of room for improvement. The acting doesn’t not stick out as being all that great. The scenes of violence are suggested and not show except for more of the aftermath. One other thing that sticks out to me when you see the house from the outside it is in a subdivision with houses very close. The close proximity of other people takes away the threat if the family had lived in a desolate location with no one near. The question lingers to me what kept out pregnant heroine from just yelling for help? From a Barren waste is flawed. With the flaws the short is still worth a watch and is likely an aspiring film maker with no budget honing his skills.