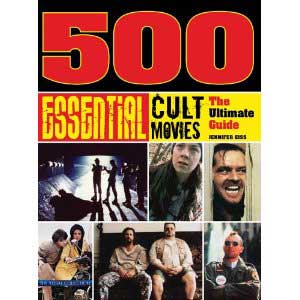 One of the great pleasures of reviewing books for me is the discovery of new cult movie focused editions. I’ve seen quite a few variants on the genre of genres, so to speak… so I know that there is quite bit of variance in the approach on these. Though at its core, the reader hopes to discover new discoveries in cinematic experiences and maybe a new favorite or too.

I would guess that most picking up this book does so because they too have a firm interest in cult style movies. And while that term is loosely defined at times, the author Jennifer Eiss does a great job at defining what exactly that means. As written, the classification of cult films is sometimes hard to pin down. It is a sense of devotion from fans that makes these films special enough to be heralded hopefully for years to come. While I’ll add that the benefit of weirdness, off beat and even alternative directions helps define these, it really is subjective.

Though for me, the defining characteristics are that the book has to include at least a healthy dose of selections from my top 20 list to feel accurate enough. This it does with great satisfaction further cementing the notion that this is definitely one book to own. I don’t say this often, but it really is one of my more favorite releases dealing with cult films to come alone in awhile. For one, there are tons of photos both color and black and white embedded into high quality gloss pages.

A quick flip thru will easily reveal the vast quantity of content featured in this 384 page book….well more specifically 500 titles. Though I will say that the author took the approach of a collection rather than analytical overviews, which is fine by me. I’ve read so many of these books that try and analyze the great offbeat styles of Lynch, Polanski and Kubrick that my eyes have glazed over from pure overkill. No, this book is perfect for a fan who wants to get acquainted, reacquainted or just looking for film ideas to gather and experience. Sure there were alot of films I was familiar with, and alot I’d seen, but knowing that the author was indeed on the same page as me in terms of what defines a proper cult film, I’m happy to say that she as given me a slew of titles to now pursue.

A few that I had seen or knew about like “Base-Moi” which definitely falls into the genre but is less mentioned, really surprised me with the inclusions. Though for the right reasons and not the wrong ones. Also fans of cinema will be happy to learn that Eiss has included selections from Anime, from popular culture, a few larger studio releases with a healthy dose of retro and foreign titles. I mean “Femme Nikita” really deserves to be on this list as much as “Rollerball” (in which they are).The various titles are broken down somewhat into classified chapters, but i think that’s less important than the fact that they are included period. Horror Fans of which our site is focused on will also benefit with some of the more obscurely diverse titles also find way into this collection. In summary, this is a book that won’t go on my shelf right away. Why? Because I’ll be referring to its titles for quite some time and loving every minute of it.