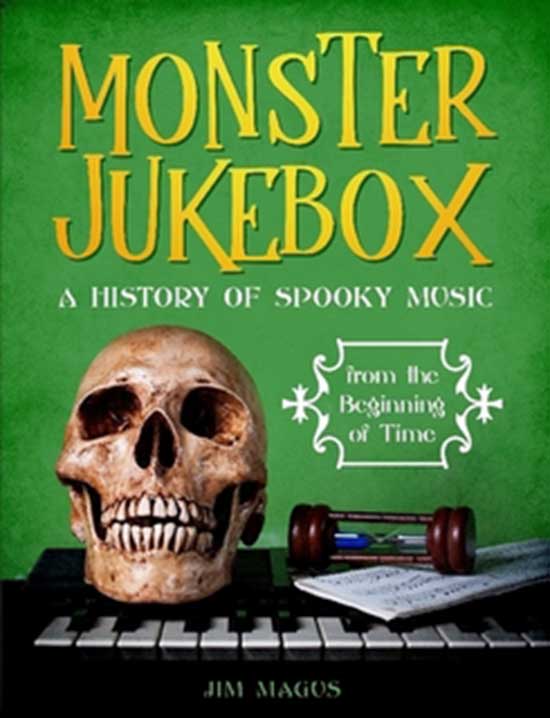 Author and music enthusiast, Jim Magus is a true music fan (if not apparent from this written achievement). More so (and better yet for us) Jim Magus loves horror music! So much, that he has dedicated his time to a 407 page book that covers it all. I’m not kidding ! I am not aware of any human being who has spent so much time into research and writing about music history as Magus has done in his new book sporting the title: “Monster Jukebox; a History of Spooky Music from the Beginning of Time“.

The book is designed to keep you educated, entertained, and is so big it could stop a door (in between readings)

To bring you up to speed. “Music Jukebox” is a mammoth on book that covers the gamut of historical music and musical offerings that crossover or directly market to the horror genre. As music lovers ourselves, we can appreciate horror in music ranging the gamut from direct pieces like 1960’s “Monster Mash” into that of the present days of Heavy metal and Marilyn Manson-type music acts (also paying homage to the this much loved tradition of horror content in music).

The book covers the areas of classical, music, rock, jazz, big band, country, folk, punk, movie, gothic and gothabilly. A wide music genre span here really goes without saying, however this book is actually more than that as you make your way thru the pages. There is a historical aspect that Jim has spent time to research and include that goes along with the music pieces and styles mentioned. One could easily use this impressive piece as a historical means of educating yourself just on the music alone. In addition, black and white images are included through-out helping readers to visualize some of the pieces and releases mentioned along the way.

Time periods? Yes, plenty here beginning with the Renaissance and early traditional times. Monster Jukebox is unique book. In fact, readers will most likely consume this encyclopedia of music entries in bits and pieces starting with their favorite eras and then working down into the smaller stories that have been gathered around each song and music style.

It digs into pieces like “Look out for the Hood-doo Man”, “Ogo Pogo” and “My Son the Surf Nut” as examples. Magus explores the year that “Monster Mash” debuted and what the world was like at that time. As music evolved so did the themes and influences.

Monster as a theme was catching on indeed with several copycat entries to follow. Influential monster themes of those eras would also leak over in the song titles with popular TV characters such as the “Adam’s Family” and “Munsters” paving the way. Horror Icons such as the werewolf, Dracula, ghouls, Frankenstein, and ghosts each played a part of the bigger picture in this theme based evolution.

“Helter Skelter”, a seemingly innocent song, would become the theme song of one Charles Mason painting a different perception to its meanings . King Kong, Godzilla, and even variations that delved more into erotica would also transpire and become central to the movement. (Anyone remember Blue Oyster Cult’s Godzilla?). All the same, The theme was growing and embraced as the years went by.

The devil, vamps, and vampires would spark the way for even greater themes to come that speak of “Hells Bells, “A Highway to Hell” and variations of the often revisited “Twilight Zone”. Ghosts and specters were not far behind, followed by serial killers and all sort of variations on the dead. We have clearly seen a wave of horror influences shaping our music tastes and providing many decades of much loved sing alongs. Nightmares and dreamscape’s continue to provide the basis of new compositions while paying homage to the older ones.

Jim Maghus has provided a great piece of literature that if not documented already has been realized thru this offering of research to the world. Horror fans and music lover alike should grab a copy for those rainy days when you aspire to be the life of the party thru consumption (with so many music history tidbits to speak about). Rock operas, music soundtracks, plays, Halloween themes and the entire echelon of modern heavy metal releases can look towards the past to invent for the future. It’s been a fun ride. A ride that has been documented per the book: “Monster Jukebox; a History of Spooky Music from the Beginning of Time”.

Those who are looking for copy of “Monster Jukebox; a History of Spooky Music from the Beginning of Time “can order directly from Lulu 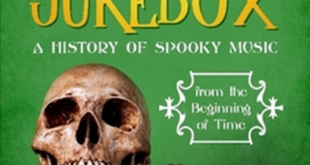