SAMUEL GOLDWYN FILMS Brings the Darkest of Nights this January 17th with EXTRACURRICULAR! 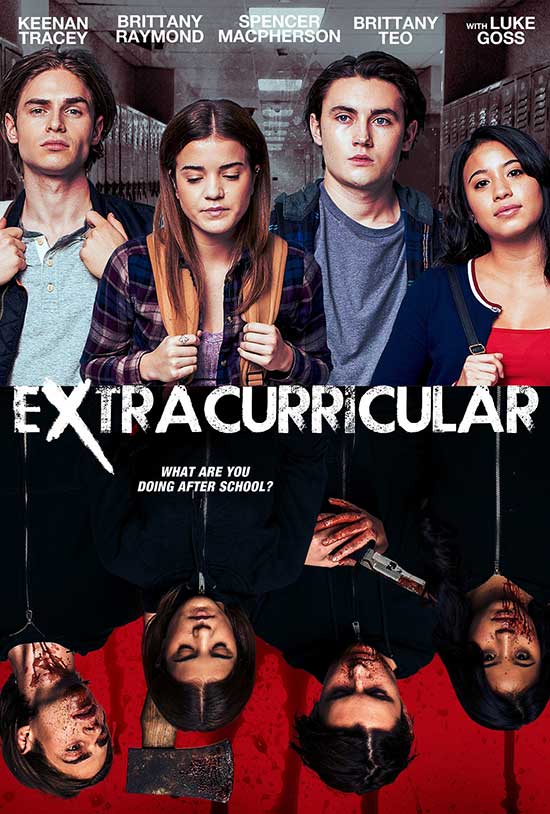 Extracurricular is a horror film from production house September 17 Studio and director Ray Xue (Transcendent). The film’s script was written by Matthew Abrams and Padgett Arango. Together, these filmmakers have created a unique horror film, one which brings several high-school students together for a common bloody purpose. Reminiscent of the Leopold and Loeb killers, Extracurricular’s story involves a murder-for-fun club, leading to one terrifying night. Starring Keenan Tracey (Polaroid), Brittany Raymond (“Dare Me”), Spencer Macpherson (Brotherhood), Brittany Teo and Luke Goss, Samuel Goldwyn Films will release this tightly wound thriller later this month.

Taking place on Halloween night, this small town is set to experience something truly horrific. And, instead of one or two killers, there are four! Ian (Macpherson) , Derek (Tracey), Jenny (Teo) and Miriam (Raymond) have chosen their next victims. Now, they must put a plan together to get in and out, before the authorities catch-up to them. But, on this night, these four high-schoolers encounter unexpected setbacks and their plans fall apart. Now, it is rush to cover up their crimes – before their families and community find out the truth.

Samuel Goldwyn Films will release this menacing thriller in mid-January. On January 17th, Extracurricular will be available on most online digital platforms. Available across the United States, Extracurricular revolves around one murderous night, in which the connections between friends are tested and where there is no turning back. Horror and thriller fans can see the film in just a few days as Samuel Goldwyn Films distributes this tense thriller nationwide!

The Official Synopsis: Extracurricular follows four high school friends who have a secret pastime: planning and executing murders. But when one of their plans goes shockingly awry, the relationship between the group is put to the test.

More details on the film at the Samuel Goldwyn Films’ website: