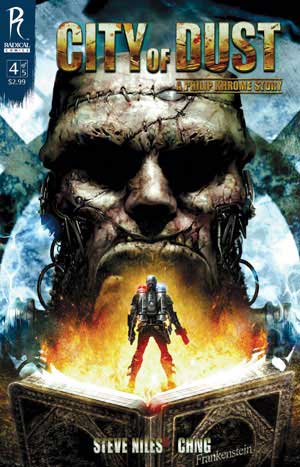 City of Dust: A Philip Khrome Story is set in a dystopian future, a cross between Blade Runner and Fahrenheit 451. Phillip Khrome is a cop who patrols the city on a jetpack. Our introduction to Khrome is basically as a rip off of Judge Dredd, a police officer who deals out instant justice. Khrome was arresting a man for teaching his children to pray. In this world religion is simply a work of imagination and no works of fiction or imagination are allowed in this society, for fear they will pollute the mind of the masses allowing the governing council no control over society. We also learn that Khrome once accidentally turned in his father for telling him a bedtime story. Meanwhile, we see people being plucked out of the street and ripped to shreds. The beings doing the ripping are classic fictional monsters, like werewolves and vampires. They leave the police stumped because they leave no DNA and that is what the futuristic crime fighting robots use to solve crimes. Underneath the first body Khrome found was a book (long since outlawed), My Monsters: ABC. All of these elements come together in a conspiracy that Khrome is stuck in the middle of.

The penciling on this series is not very consistent, as there are four different artists used over the course of the four issues out so far. The constant changes in style are very frustrating. The first issues artist, Zid, is probably the weakest. He draws faces without a lot of detail, therefore making two male characters often hard to distinguish from one another. His coloring is also with a lot of fault as he doesn’t quite grasp the dynamics of the Blade Runner style pseudo noir. The art vastly improves in issues 2 through 4 when Garrie Gastonny and Brandon Chng are brought do the finishes and the team of Buddy Jiang, Leos Ng, and Sixth Creation do the coloring. This much larger team grasp the pseudo noir style the Steve Niles was trying to portray in City of Dust. They visually tell the story much more effectively than Zid did alone in the first issue, mixing the bright beaming lights of the futuristic city with dark tones of the story.

I applaud Steve Niles’s way of combining elements of several different sci-fi and horror stories and creating something unique with them. Admittedly after the origins of the monsters are revealed, it becomes harder to relate to the world Khrome lives in. The story needs more exposition about how society came to the point it reached in the story. That way I would be better able to empathize with story behind the monsters creation. Each issue has a great cliffhanger that really makes me want to devour the next issue. The story may seem silly at times, but it really makes you happy to live in a world where imaginations can flourish and everyone can read stories about monsters. 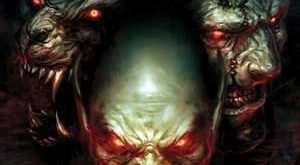 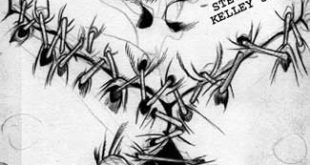