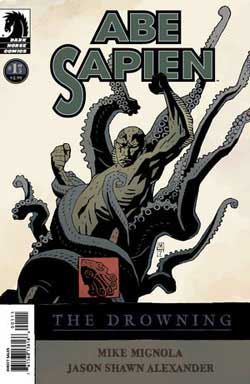 Abe Sapien is on a new mission to recover from the depths of a Spanish island, an ancient dagger originally created to eliminate evil spirits and demons. “The Drowning” mini series brings into play a fitting journey of aquatic underpinning, of danger as only the Hellboy universe can bring to comics. Like most comic series from the mind of Mike Mignola, creator and key writer of ALL Hellboy and related titles.

This plot summary may seem even vaguely recognizable to you, and you’re probably right. Many fans love the Hellboy universe as do I. And with most Hellboy stories they follow a fairly straightforward model. This series it is a great reference tome of sorts, of flashbacks to nearly every other Hellboy/B.P.R.D story ever written and illustrated. Not to say that this hot and dusty land of Spanish influence vs creatures from the sea isn’t entertaining- it’s just not that exciting at this juncture. Mignola seems a bit tired and lost for ideas, it feels all too customary. And “The Drowning”, obviously, is no exemption. This first issue serves as a debriefing of this new adventure for Abe, as he learns the history of days gone by of a paranormal investigator from the swashbuckler age. From there, if you’ve ever read Hellboy at all, you can pretty much figure that it will be loaded with monsters and bad folks and statically that is the status quo.

The artwork by gifted Jason Shawn Alexander takes him into the long line of artiste’s offered the job to replicate the Mignola required art formula in his series of titles. He awesomely succeeds on many levels, but, at times he seems lost in the world of visual storytelling. I completely understand Mignola’s decision to keep the series familiar to its fans with stunning art. It’s just that after years of reading and enjoying Hellboy and related stories, this particular style has congested my feelings despite its grasp on high quality comic art. I’d rather have terse storytelling instead of pretty pictures.

As the Hellboy universe continues to grow into its second decade, newer and younger fans will be introduced for the first time its style of horror and think it is simply a brand new concept and accept it at that level. So, aside from my thoughts there is no need to upgrade anything here because it works for retail. My heart would just hope to see some new advances in the whole bloody series or it may simply dry up and not light the fires of its faithful legion of fans in the future. Ultimately, fans of the Hellboy universe will take pleasure in this series. After all, “The Drowning” series was an extremely solid read. The dilemma is, I just can’t help but shake the feeling that I’ve read it before and before and before.