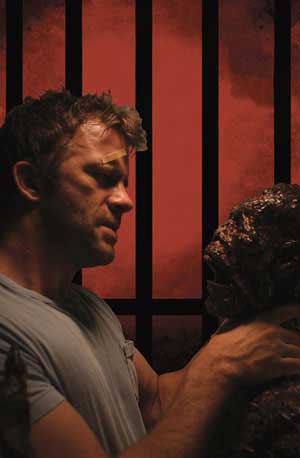 Cal Mcdonald is back with his trusty sidekick Mo’Lock. This time it’s a bit more on the crime drama side with zombies to boot. This issues I’m reviewing actually span 4 issues written again by the prolifically talented Steve Niles. Art work is penned by Nick Stakal with color work by Michelle Madsen. Though most striking is the 4 covers each illustrated by Tim Bradstreet. As these adventures evolve we get more insight into the life of one Cal Mcdonald. Though this time he’s in hot water as he is framed and sent to prison.

Which on some level is a step up from living in the sewers as he confesses to several times in the story. Though times are hard and no money means no money. Cal makes a living by getting rid of the bad guys. Not the crime some much as the undead, the demons, the vampires, the creatures. As our story begins he embarks on a mission that just so happens to be the cleaning out of a coven of vampires who have been kidnapping young females goth girls to feed off of. The raid is pretty quick and clean, Cal, handles it like a pro and gets on with the killing. At current Cal is laying low due to a corrupt politician who has targeted him as a wanted man. Staying out of the circuit is the only thing keeping him from jail though Cal still finds a need to attend his old watering holes.

As things go, nothing is clear cut and old Cal gets framed and sent to jail. Mea while corruption and ghouls still roma the streets so with the help of his bud Mo who can walk thru shadows as a member of the undead he begins to unravel the corruption that the politician and warden are hiding. To sum it up, Cal is equipped to summon the undead for his own purposes and at the same time unravel the mystery of what’s been going on in the shadows. In the shape of things Cal is a pretty beat up looking guy. Always wearing band aids, scars and worn you’d think he would have a voice like Lance Henriksen. Its pretty apparent from the getgo that Cal has had a hard life and still manages to do what is right. I think he’s driven more by his ego than his actual stamina but whatever works right? Cal can handle himself and knows alot about killing the undead, so like it or not society needs him more than he needs them.

This particular issue has more of an emphasis on old murder mystery’s than just regular creature killing. The 4 issues pack a nice story that sets the pace for the adventures of Cal. For horror fans there is still plenty of killing and disemboweling to enjoy and take the edge off of the seriousness. The pen work is interesting but not my favorite of art styles I’ve seen Cal in. It comes across more as partial Ashley Wood when he decides to be sloppy with big ink marks and random accidents. I’d love to see some issues done in the same style as the cover art but maybe that’s asking to much.

In all this is still an interesting story, that after a while is not so much affected by the ink work as it carries the narrative nicely. As a new reader of Cal comics, I’m sticking with the killing demons style issues over the murder mystery versions. I love the character though and look forward to reading more adventures on this cat. Hey everyone needs a zombie side kick right?

The link below is actually to the paperback version which collects the 4 issues, as of today it looks like its not released test but I’m gonna point you to it anyways. I prefer the TPB over the comics, so that where my interest lies.