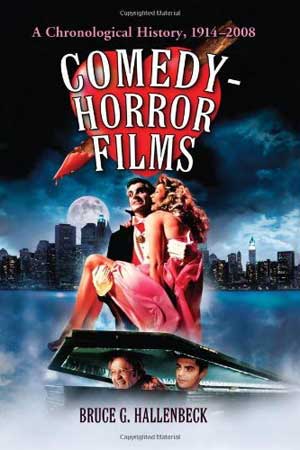 If you’ve spent some time collecting, reading or purchasing the vast variety of horror film books, you already know that to some extent certain aspects have been oversaturated. Take for instance, zombie film books which seem to be available by a number of authors collecting information from the zombie film history. Another aspect is general horror film books..that seems to be never ending only sometimes offering a different flavor from the next.

This is why “Comedy Horror films” is a book that appealed to me. Certainly we were familiar with horror comedies but maybe not so much as a singled out aspect of the genre. And looking over the read, it’s a surprise that there weren’t more books on this stand alone subject. Bruce G. Hallenbeck is our guide and author thru the films of today and yesterday. He covers each decade with a thorough overview of the films and titles that were prominent in those eras. Add to that a analysis of the films themselves and how the movement has changed in tone, presentation and comedic flair. Yes, there is quite a difference in horror that ranges from “Abbott and Costello meets Frankenstein” to “Motel Hell” to “Army of Darkness”.

It is explained that in early times, taking an approach of horror and comedy weren’t as prominently accepted as it is now. The audiences were still trying to find their niches and going full throttle just wasn’t an option with the cinemas and studios. Largely the direction was determined by studios who tried different things based on featuring acting performances or common studio monsters of that time. Abbott and Costello were actually a team who really grasped this concept in which spawned a series of follow ups.

The mold was set into motion and soon other studios started taking chances as well. Critics ranged from accepted to downright dismissive but something about combining horror and comedy presented a new way of presenting the genre to maybe a wider audience spectrum. Over the years, this moved away from the slapstick and into really taking the aspects more literal. In fact there are quite a few titles that sprouted that some audiences didn’t even realize were comedy horror pieces. “Motel Hell” and “Re-animator may be overshadowed in gore content but at the heart was a poke at more serious films that these could model after. One such title was “Return of the Living Dead” which is an obvious poke at the living dead films. Hallenbeck describes these transitions and audience acceptability with great finesse and a love for the genre. In the course, his knack for fact finding also brings the more unfamiliar aspects from production notes and actor backgrounds.

The 80s were perhaps one of the greatest contributors to the genre, with films such as “Evil Dead 2” hitting viewers like a brick with it’s off the wall approach. Other contenders such as “Night of the Creeps” and “Monster Squad” became additional cult hits mostly because of there lack of DVD release for so many years. Though in short, the familiar subject of zombies and comedy has flourished to this day with releases coming out even as I type.

One thing is certain. Nowadays the comedy horror of films are much more pronounced such as the “Scary Movie” titles. Films such as “Bride of Chucky”, Shaun of the Dead” and “Trail of the screaming Forehead” scream comedy horror in their titles alone. Other films like “Beetlejuice” and “Killer Klowns from outer space” took to a more cult embraced status each offering a different aspect of comedy woven into the horror realm. This book is a fun read, hands down. Some readers may find a few titles to investigate on their own while others may enjoy the summary and overview approach. The films are all given proper page lengths to take this release past just a review book and offer a interesting historical retrospective on the films, the productions and the talents involved. A cool book from the team at Mcfarland publishing.