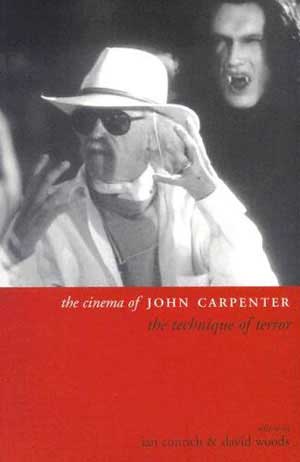 John Carpenter is well known for his horror film contributions that have influenced an entire generation.

As mentioned in the book, it appears that Carpenter’s greatest contributions reside in his earlier works and ones that weren’t under a studio schedule. Primarily the basis of this book is to analyze, discuss and compare points on this great director’s work. Done so in an academic tone, much is beyond the causal light reading. And even though points are well noted, as a fan I don’t really share the same opinion that his “new” works were not of value.

Of course with any successful director there will be highlights and failures, this book attempts to cover that aspect and why they failed to live up to previous works. Even with a film such as “Ghosts of Mars” which has been critically abandoned, I still find the purpose of these ventures and include them in my fascination with Carpenter’s work. I was disappointed that “Ghost of Mars” wasn’t included in discussions or analyzed. The primary focus of works stem from the “Halloween”, “Fog”, “Thing” and “Christine”. We are given some insight into other works such as “Prince of Darkness” , “They Live” and Vampires”.

The writers attempt to cover all aspects of Carpenter’s career and talents. A few chapters are even dedicated to the music compositions Carpenter composed for his films. Chapter 4 goes into great detail but much of it comes across as boring and pretentious naming musical patterns and music theory callouts. This is not really necessary for most most readers unless you assume they are all music theorists. The music is highlighted which is a nice inclusion while a listing is provided for further looks. The compositions are broken down into summaries but at the heart really Carpenters scores are based entirely on common reoccurring repetitions that evolve at a dismal revelation.

There was alot of repetition in this edition as it notes it is a collection of essays. “…..book comprises essays that address the whole of this work as well as those that focus on a smaller number of key films”. So as we jump from chapter to chapter the same films are analyzed in a number of different ways. I’m not so sure that all the points of view are necessary, I would have rather dug more into stories about the actual productions. The book does provide a great interview with John, which in retrospect was actually my favorite portion.

There is much you can extract from the essays to give purpose, reason, and break downs to many of Carpenter’s works. You may have to dig through all the philosophical film speak nonsense though to get there. As much as a tribute this book attempts it also in many ways doesn’t hold back to pointing out the downfalls of John Carpenter. I found it interesting and humorous that many quotes from past review critics were mentioned that slammed Carpenters work, let alone his best work. Even the much heralded “Halloween” was read with a slam review. This only translated into 2 things for me. You can’t please everyone “even” when held as a master of some of horror’s greatest achivements…and the direction of the book was fragmented.

They speak of his film relationship with Kurt Russell in many of the films, though as we all know..Kurt is a great actor and comes to the table playing his parts without much hand holding. This director / actor relationship in many ways defined the success of films like “Escape from New York” and “The Thing”

As I read into the analogies of comparing “Christine” to the female anatomy, the frequency of Carpenter tendency to incorporate things emerging from darkness. Examples such as fog, mirrors, body parts…etc are chosen in addition to his flavor for things of the gothic nature. This of course is subjective. I’d weigh these thoughts with your own interpretation.

A chapter devotes itself entirely to the fan craze of his work in early days of Fangoria fan boys and thrill-seekers making claims to Carpenter’s hold on the horror genre. This was another aspect that probably could of gone the wayside, but it did have a certain nostalgic tone to it.

In summary, I had mixed feelings about the entire product. You’ll find area’s that speak louder than others and some that will simply bore you to death. For the sake of those others, it still is worth a look especially if you are a collector of Carpenter goods.