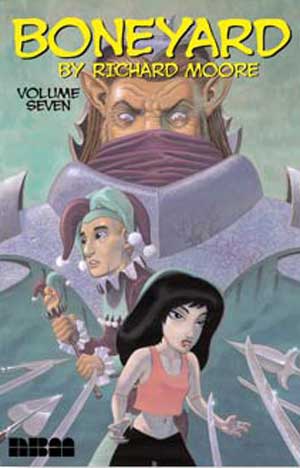 Richard Moore brings us volume seven in his ongoing epic titled Boneyard. This edition is extra special as it brings closure to a long fantastical journey. As its written in current a press release:

After 28 issues and 40,000 graphic novels sold, Richard Moore has made the decision to bring the BONEYARD saga to a close (for now). Years of sustained artistic excellence have led to this moment, and we’re excited to bring it to you. Love, adventure, excitement, scares… the series has had it all, and in this concluding volume, Moore takes it to the next level, raising the stakes for Michael and friends in ways you’ve never seen before.

So where does that bring us in this fine TPB that combines clever elements of horror, fantasy, comedy and just about anything that the writer can come up with in these final pages? For one we find ourselves with Michael Paris and Abbey the demon who’s sporting a paint-on new pair of jeans. As they are moving furniture it seems that even that simple task can’t revolve without all kinds of creatures popping out of the woodwork.

This time a lovely faerie named Lita has arrived on the spot from a time portal. Lita, a childhood friend to Michael asks that he aid her in escaping her arranged marriage that is about to take place. In the meantime statues talk to each other, monsters go about their business and the elements of time and space seem to get mixed up a bit. When a band of warriors from Faerieland show up, they are intent on taking the princess Lita back to their time. Of course, this breaks into an all out war as the demon Abbey calls in a few monster friends who are happy to oblige.

A fight breaks out that pretty much slaughters most of the warriors except for the ones who l escape into an arranged time funnel. When Michael jumps in to save Lita, the group must call upon a friend to help them arrive into the right time and alternative universe. A few jumps and wrong calls brings hilarious results as the group is conditioned with each move. Eventually they all arrive and a huge battle ensue that involves a mass of magic, mayhem and the fantastical. This final edition is chock full of fun, flavor and will keep you glued till the end. If you’ve missed the series as I have, this final edition is worth the wait as an entertaining read with some fine pen and ink work.