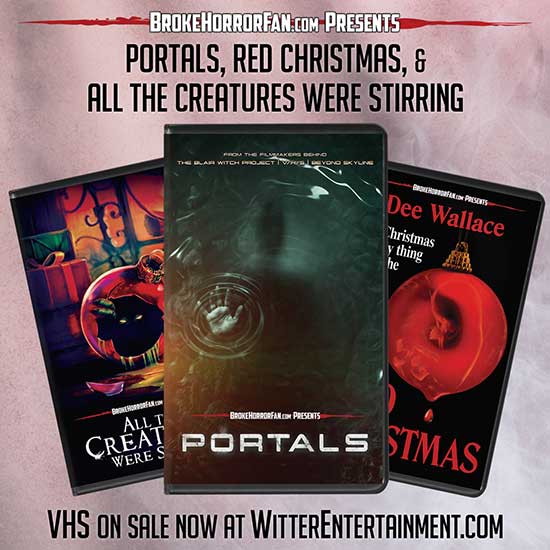 All the Creatures Were Stirring stars Constance Wu (Crazy Rich Asians), Jonathan Kite (2 Broke Girls), Jocelin Donahue (The House of the Devil), Amanda Fuller (Orange Is the New Black), Graham Skipper (Beyond the Gates), and Chase Williamson (The Guest). It’s housed in a black clamshell case with artwork by Devon Whitehead, limited to 50.

The 2018 Christmas horror anthology includes a letter from directors David Ian McKendry and Rebekah McKendry and an exclusive introduction by the McKendrys, actor/producer Morgan Peter Brown, and producer Joe Wicker.

The 2016 Christmas horror film includes a letter from writer-director Craig Anderson, an exclusive introduction by actress Dee Wallace, and a career-spanning interview with Wallace.

All films are officially licensed and approved by their respective filmmakers. For optimal VHS presentation, they have been cropped from their original aspect ratio to 4:3 full screen. They’re available while supplies last at WitterEntertainment.com.
ABOUT PORTALS
Trailer: youtu.be/7OzbsAclwCQ
Iconic horror directors Eduardo Sánchez, Gregg Hale, Timo Tjahjanto, and Liam O’Donnell team up for a sci-fi/horror anthology tied together by a single event: the appearance of cosmic portals around the world. While many flee from them, the real terror sets in when people are drawn into these mysterious voids…
Portals is also available on Blu-ray, DVD, and Digital via Screen Media Films.
ABOUT ALL THE CREATURES WERE STIRRING
Trailer: youtu.be/JhVIeDhvqb4
The joyful spirit of the holidays is about to take one dark turn after another. From sadistic office parties and last-minute shopping nightmares, to vengeful stalkers and immortal demons, there’s plenty out there to keep you from getting out of bed to see what’s under the tree this holiday season.
All the Creatures Were Stirring is also available on Blu-ray, DVD, and Digital via RLJE Films.
ABOUT RED CHRISTMAS
Trailer: youtu.be/gPAFo0lvCMU
Horror legend Dee Wallace stars as the stressed-out mother of a squabbling family gathered together in a remote Australian estate on Christmas. When a mysterious, deformed man named Cletus appears at their door, things soon change from petty insults to bloody, imaginatively orchestrated violence as the matriarch attempts to protect her family from the vengeful intruder hell-bent on tearing them apart.
Red Christmas is also available on Blu-ray, DVD, and Digital via Artsploitation Films.
Share