10th Muse Comic Book is Back after Nineteen Year Debut 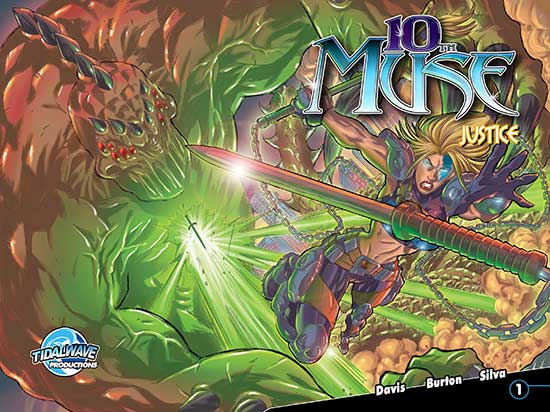 The hit comic book series that started off at Image Comics is coming back to TidalWave Comics nineteen years to this month.

Rated the sixth highest selling comic book in its debut in 2000 by Diamond Distributors. The new issue is being released November 20th in print and online.

Greek mythology has documented the nine Muses, the inspirational daughters of the almighty god Zeus. But history forgot one—the 10th Muse. Emma Sonnet mysteriously disappeared five years ago during a summer trip to Greece celebrating her graduation from law school. Yesterday, she resurfaced just as mysteriously as the newly appointed District Attorney, with a unique take on the law. Battling evil in the courtroom by day, and in the shadows at night, Emma Sonnet is tipping the scales of justice her way, as the 10th Muse. Billionaire industrialist Grayson Bishop, charming and as deadly as a cobra, will as easily kill a rival as bury them in business. Now his sights are set on the 10th Muse, and he wants her dead in the worst way.

“We are excited to bring back this character after so many years. She has been a comic book icon when we launched her. I have been waiting for the right time to bring her back”’ said creator Darren G. Davis. “If you loved the old series, you will definitely enjoy the new one”.

“10th Muse: Justice #1: There is a line of evil creatures with a vendetta against the 10th Muse. Cronus, Circe and Sonnet have conjured a new villainess to the mix. Meet Justice and she is after the Muse and her friends. All this to try to bring back 10th Muse’s classic foe Medusa as well as the frightening Charybdis.

A special new hardcover edition of the original 10th Muse comic book that was first published by Image Comics in 2000 will be available as well. “10th Muse #1: Hardcover Anniversary edition” will include a bunch of extras. Created by Darren G. Davis, Written by Marv Wolfman and art by Ken Lashley. In print on Amazon: amzn.to/342VwOQ
Back issues graphic novels can be purchased through Arcana Comics.