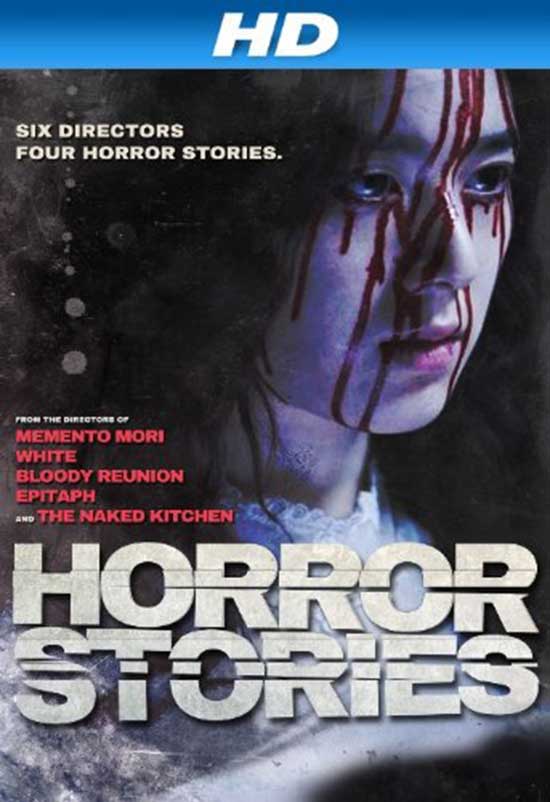 A teenager is abducted and forced to tell the scariest tales she knows, leading to this anthology of four stories: a brother and sister are under siege while home alone; a killer escapes police custody mid-flight; step-sisters take plastic surgery to nightmarishly macabre extremes; a paramedic and mother standoff over her infected young daughter.

I’ve said it before, but I’ll say it again: I do love a good anthology. While this Korean omnibus from the early part of the decade may not have the most imaginative of titles, it still manages to offer four interesting segments and even a scare or two (some spoilers ahead).

The frame story revolves around a young girl that has been kidnapped by a local madman. In order to avoid being murdered there and then and to help his captor fall asleep, she tells him scary stories.

First segment titled Don’t Answer the Door tells a tale of ghostly encounters and wild imagination. In it two young siblings, left alone for the evening while their mother works, find themselves in a scary situation when a creepy delivery guy refuses to leave after dropping off his delivery. The suspense of the story comes largely from not quite knowing whether the intruder stalking the children is real or just a figment of an overactive child’s imagination. Or are there possibly two different hunters; one flesh and blood and one not from this world?  The story that unfolds through several dream and hallucination sequences, never makes it quite clear. While the main part of the segment works wonderfully well and even offers a few genuinely creepy moments, the very end did confuse me somewhat. It tries to offer some sort of explanation for the events that just happened, but something must have gotten lost in translation here and I could not quite get my head around it. It doesn’t take anything away from the rest of the segment but might make you want to go back and see it again, just to see if you can make more sense of it.

The second segment The Endless Flight is a tale of a serial killer and of those unfortunate enough to get stuck in a confined space with him. During what should be a simple transport mission, the said killer, responsible for more than ten brutal murders, breaks free in the middle of a flight. After the rest of the limited crew ends up as bloody mess on floor in no time at all, only So-jung, a young flight attendant, is left to fend for herself and the plane. The Endless Flight is a simple little splatter piece with no real complexity. At the beginning there seems to be a suggestion of a supernatural element being involved, but this is never really followed up in a conclusive way. Out of the four, this was my least favourite story, but that’s not to say it was a total waste of time; just not quite as strong as the others.

And this brings to us to the third and incidentally my favourite story: Secret Recipe. Based on Korean folktale Kongjwi and Patjwi, a variation on Cinderella, it tells a tale of jealousy, greed and getting what you deserve. In it a young bride Gong-ji is getting ready to marry a wealthy local bachelor Min. Unbeknownst to her, her stepmother and -sister Baek-ji are plotting behind her back to get Min to marry Baek-ji instead. But just like in any good fairy-tale, evil schemes will only get you so far and the pair soon find out that behind the handsome fiancée’s youthful looks, lies some pretty dark secrets.  The hint towards what those secrets might be is obviously in the name of the segment and if you’ve seen films such as Fruit Chan’s Dumplings, you might guess what lies ahead. Still the predictability doesn’t in any way ruin the story and its enjoyably dark atmosphere.

The last story Ambulance on the Death Zone brings completely new kind of horrors with a tale following an ambulance crew desperately trying to rescue a patient in middle of a zombie outbreak. The tensions rise when the on-board doctor and his nurse disagree whether their patient, a young child, is worth wasting medicine on or whether she is already a lost cause. Zombies enter the story only in the very end of it and before you actually see them, you can’t be quite sure just what kind of outbreak are we dealing with here; up to that point the dialogue only refers to someone being “infected” but doesn’t really specify with what. It’s this slight mystery and tension between the characters that make the story interesting and the arrival of the zombies is just a kind of a gory bonus.  All in all a decent ending to the film. 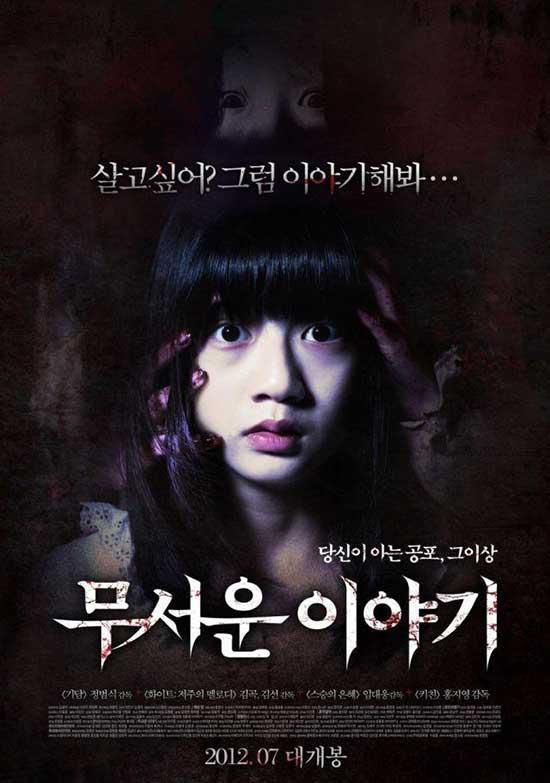 While Horror stories will probably not be the scariest thing you’ll see this year, it’s still a very solid anthology with good balance between stories and is sure to keep most horror fans entertained for it’s nearly two hour running time. However, if you are left wanting more, you can hunt down it’s two sequels Horror Stories 2 (Mu-seo-un Iyagi 2, 2013) and Horror Stories 3 (Mooseowon Iyagi 3: Hwasungeseo on Sonyeo, 2016).