Home | Home is Where the Hurt is in FAMILY, a Dark, Award-Winning Psychological Drama Coming to DVD/Digital

Home is Where the Hurt is in FAMILY, a Dark, Award-Winning Psychological Drama Coming to DVD/Digital 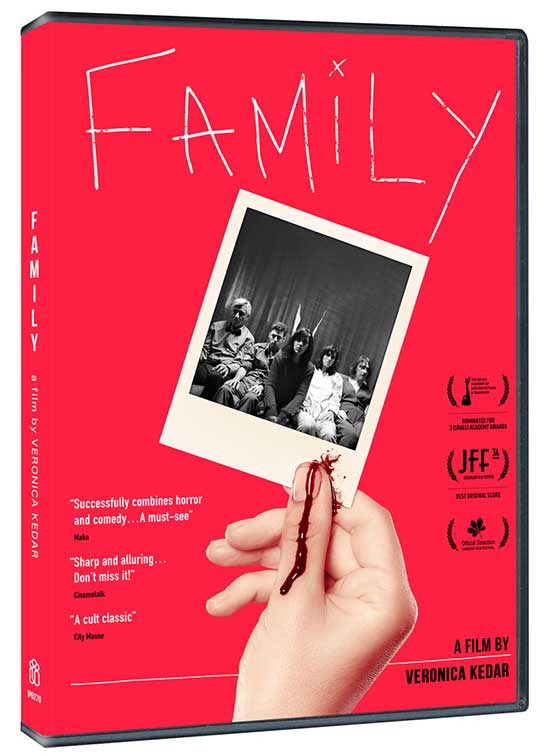 HOME IS WHERE THE HURT IS IN A DARK,
ACCLAIMED PSYCHOLOGICAL DRAMA

Nominated for Three Israeli Academy Awards and Named by Bloody Disgusting as “One of the 10 Best Foreign Horror Films of 2018”, This Disturbing Portrait of an Extraordinarily Dysfunctional Family from Writer/Director/Star Veronica Kedar Will Also Be Available Via IndiePix Unlimited on Amazon Channels

Home is where the hurt is. Lily would do anything to make it go away. In a perfect world, she would have grown up with a loving father, a caring mother, a sane sister and a brother who wasn’t madly in love with her. But you can’t always get what you want, and Lily finds herself in the living room, staring at four dead bodies. She goes to her therapist after hours, to confess and make sense of her confusing day. But her therapist isn’t home. Instead, her judgmental insensitive teenage daughter… is. Lily finds herself, once more, locked in a battle of wills for some serious adult attention. FAMILY is the portrait of every family…if it’s shot in the dark.
In her third feature — which also captured “Best Feature Film” at Cinequest San Jose and the Brooklyn Horror Film Festival, and Best Original Score at both the Jerusalem International Film Festival and the Imagine India Film Festival — Israeli writer/director/star Veronica Kedar combines performance, photography, horror, and memory into a uniquely sympathetic, nonlinear narrative about a young woman driven to kill – a depiction of extremes that attacks the one horror we’re all most intimate with: family.
AWARDS
FESTIVALS
PROGRAM INFORMATION
Type:  DVD/Digital (Amazon, iTunes, Vudu, Google)
Running Time: 104 minutes
Genre: Horror/Thriller
Aspect Ratio: 1.78:1
Audio: Stereo
Language: Hebrew with English Subtitles
Share

Tags Home is Where the Hurt is