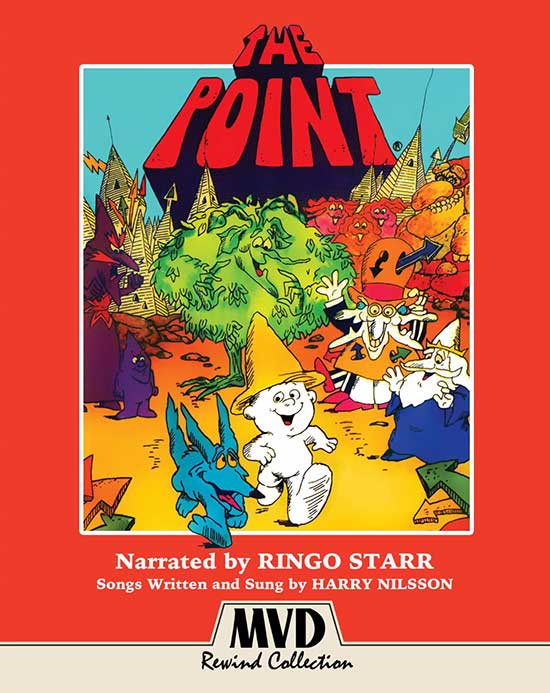 MVD Entertainment Group proudly announces the high definition release of Harry Nilsson’s “The Point!”, making its HD debut on both Blu-ray and HD Digital in an Ultimate Edition.
In late 1970, Grammy Award© winning singer/songwriter Harry Nilsson released his groundbreaking album, “The Point!”, a thematically brilliant, densely orchestrated concept album packed with more hooks than a meat locker. According to Nilsson himself, “I looked at the trees and realized all the leaves came to points and even the branches came to points. I thought, ‘Oh! Everything has a point, and even if it doesn’t, there’s a point to it.'” Produced in 1970, the animated film version of The Point! first aired February 2, 1971, as an ABC Movie of the Week. The film was directed by Academy Award© winner Fred Wolf and produced by Murakami-Wolf Films in association with Nilsson House Music. Complete with story and songs written by Nilsson and narration by Ringo Starr, The Point! is a timeless enchanting fable for the whole family to enjoy!
THE POINT: Years ago there was a place called The Land of the Point, because everything in The Land of the Point had one – the barns, the houses, the cars, everything – even the people. Everyone, that is, except Oblio (Mike Lookinland, “The Brady Bunch”), who was born round-headed. Since he had no point, Oblio – along with his trusty dog, Arrow – was banished to the Pointless Forest. Join them to see what wonders await these two intrepid travelers as they make their way on their amazing, song-filled journey of discovery!
ALL SONGS WRITTEN AND PERFORMED BY HARRY NILSSON
Me and My Arrow
Everything’s Got ‘Em
Poli High
Think About Your Troubles
Life Line
P.O.V. Waltz
Are You Sleeping
With the entire re-release endeavor overseen by Lee Blackman for the Nilsson Estate and MVD Rewind Collection’s Eric D. Wilkinson, the project proved to be a challenging process. According to Wilkinson, “We searched everywhere but came up empty-handed in regard to locating the original negative elements. Thanks to the generosity of collector Kier-La Janisse, who provided a rare 16mm print, we oversaw a 2K HD scan, which included shot-by-shot color-grading to reduce fade and improve consistency. Considering the condition of the elements we had – while a complete restoration proved to be unfeasible – the end result is the best the film has ever looked and we are proud to give fans and collectors the best edition on disc and digital that has ever been created for this classic animated film.”
“The Point! Ultimate Edition” Blu-ray is packed with hours of bonus material that includes not only all of the previously available bonus featurettes, but also brand new material produced exclusively for this release by Kier-La Janisse and Lee Blackman, including new interviews with voice-over cast member Mike Lookinland; screenwriter Norm Lenzer; Harry Nilsson’s son Kiefo Nilsson and composer/producer Bobby Halvorson; and Nilsson biographer Alyn Shipton, whose featurette contains mini-interviews with several people familiar with Harry Nilsson’s work on film.
THE POINT! [ULTIMATE EDITION] SPECIAL FEATURES
*          New 2K High Definition transfer from 16mm Film Elements presented in its original 1.37:1 aspect ratio.
*          5.1 Dolby Digital Surround & 2.0 Dolby Digital Stereo with Optional English Subtitles
*          NEW! “The Kid’s Got a Point”: An Interview with Mike Lookinland (HD, 17:13)
*          NEW! “That Old Guy Wrote The Point”: A Conversation with Screenwriter Norm Lenzer (HD, 15:01)
*          NEW! “Everybody’s Got a Point: Kiefo Nilsson and Bobby Halvorson on Adapting the Point” (HD, 15:50)
*          NEW! “Nilsson on Screen”: Biographer Alyn Shipton and Friends on Harry Nilsson’s Film Projects & Appearances (HD, 1:01:13)
*          The Making of The Point: Four-part featurette including: “Who Is Harry Nilsson?”, “Pitching The Point”, “Making The Point” and “Legacy of the Point” (SD, 26:40)
*          Collectible Mini-Poster
MVD Rewind Collection Presents The Point! [Ultimate Edition] Blu-ray. National release date February 11, 2020. Ultimate Edition executive producers Lee Blackman and Eric D. Wilkinson. Available exclusively on Blu-ray and Digital from MVD Entertainment Group.
Share