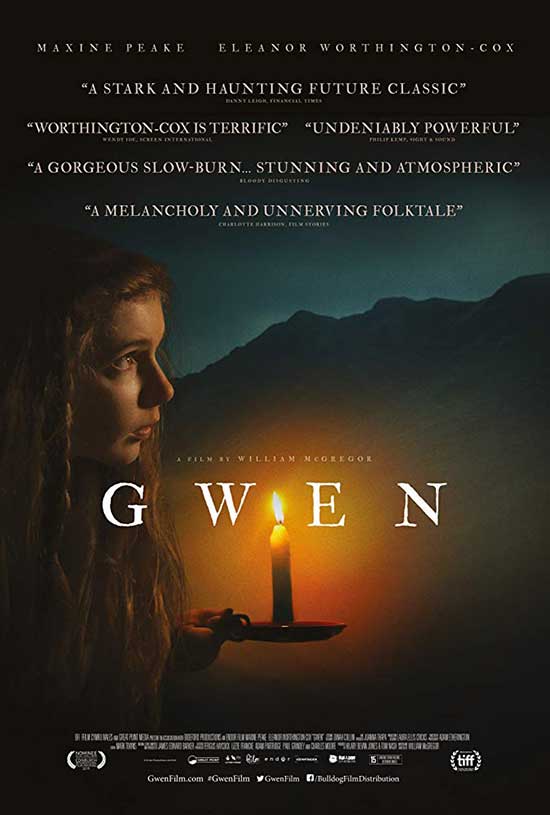 “In the film, Gwen is a young girl whose life seems to be collapsing around her. Struggling with her mother’s mysterious illness, her father’s absence and a group of angry villagers threatening to take her farm, Gwen must find the strength to guide her family through the darkness. But as a malevolent presence begins to take grip of her home, it becomes apparent there is a greater evil that may be too strong to overcome.” 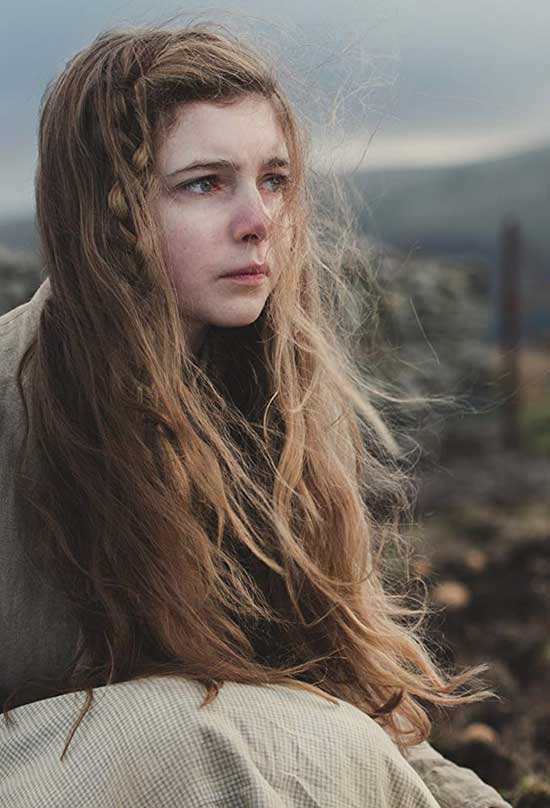 The film opens with Gwen and Mari (Jodie Innes) playing. They are in the middle of the nowhere with mountains surrounding them. They have a farm and we meet Dr. Wren. Shudder never disappoints when picking a creepy, disturbing story. 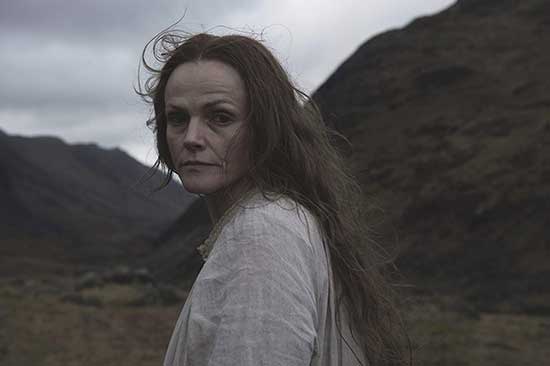 Maxine Peake does an excellent job portraying Elen. You can tell Elen is a fighter and not quite prepared for what is going to happen. The shots in Gwen are beautifully done. The mountains, the brutal wind, the darkness and what is lurking?

Gwen has a pestle and mortar crushing something that she picked from outside. She finally tells her mother that she heard something or someone outside last night. Her mother dismisses it.

They arrive home after church and find what looks like a heart nailed to the door. Gwen is picking vegetables; her mother is chopping wood. They have yet to discuss why a heart was nailed to the door. The lack of discussion and the pace the movie goes makes it a little creepier. You are not quite sure what is happening? It isn’t over the top, you are not sure if it’s a monster, demon, man?

The shot of the horse rolling in the grass was beautiful. It gave you a quick break from whatever is tormenting Gwen and her family.

The environment and the lands are brutal. Gwen wakes up to a huge shock. She finds her mother standing outside with all the dead sheep. Sheep that were fine hours ago. Her mother wants them burned.

Gwen heads back outside and is at the neighboring house. It seems abandoned and her mother is angry she is in this place. They show a flashback to what looks like a happy family moment with the father who is missing or dead?

Elen is taking care of Gwen and Mari. She winds up having a horrible seizure, Gwen puts her to bed and takes care of her sister.

They wind up going to church and Elen collapses again after a seizure. Doctor Wren offers a tonic as a solution. This seems like a possession film but the way the other villagers are treating Gwen, its like they have her on a constant witch trial. 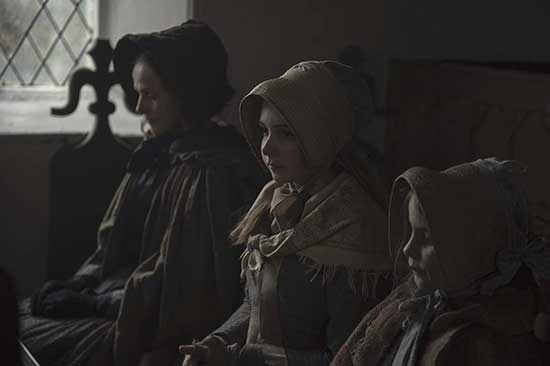 Elen is visited by Mr. Wynne. She goes on a small rampage and wants to Gwen to “strip the carcass” o of the poor horse that she had to slaughter because it was injured. Gwen carefully cleans up her mother after she collapses again. Gwen is flashing back to seeing her father again with the family.

The subtle music and sounds make this movie creepier. The blurriness of how Gwen sees what looks like mother walking away from her.

Gwen’s dream is a nightmare. It shows her mother eating her arm and possibly possessed? It is a nightmare. Elen reveals that Gwen’s father isn’t coming back. Mr. Wynne is a shady, conniving character. They seem to want the property that Elen has. The DVD cover moment is in the movie, its an eerie shot of Gwen burning what she believes in. 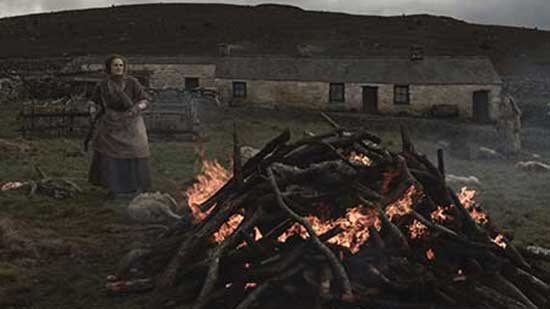 A man shows up to hurt Elen and you just want to scream, “get the axe” as Gwen does get the axe. He briefly uses the axe against Gwen until Elen gets up and saves her. The brutality, there is no ability to call for help or scream for a neighbor. They have no neighbors within screaming distance. The angry villagers with fire are coming. They are being led by Mr. Wynne, no offense to Mark Lewis Jones but, boy is he a curmudgeon.

This feels like witch trials. Watching this annoying man light this woman on fire is horrible. Mr. Wynne is heartless. He lights Elen on fire and then the house. Gwen and Mari stand outside in the cold watching the house burn. This movie was a little more than a horror film. It shows the tragedy and survival or a woman who was trying to take care of her children and being singled out among others.

It’s a beautifully tragic movie. The DVD has bonus features. It doesn’t go into full details which kind of makes it scarier not knowing. Make sure to pick up a copy of Gwen. 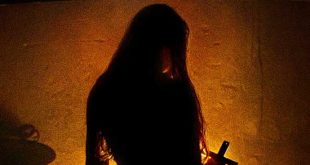 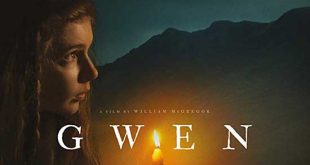