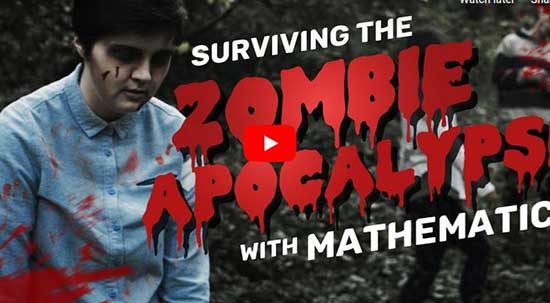 In it, a group of our researchers attempt to work out the best strategy for surviving a zombie outbreak, inspired by some of our favourite zombie movies.

They use mathematics to model a range of different strategies (fighting the zombies, hiding from the zombies, sending in the army…) and come to the conclusion that the best plan is to capture and domesticate the zombies (imagine the final scene of Shaun of the Dead, but on a massive scale).
Facebook: www.facebook.com/theuniversityofsheffield/videos/423902188545153
Twitter: twitter.com/sheffielduni/status/1189835830451302400

the zombie outbreak is a useful metaphor for the real work our researchers are doing, using the same mathematical models to track the spread of viral infections such as measles.

This is also covered in the film and there’s a press release on our website which goes into it in more detail: www.sheffield.ac.uk/news/nr/surviving-zombie-apocalypse-maths-1.870953