From the creators of THE CONJURING franchise, Chad and Carey Hayes, and Faster Horse Pictures’ Cindy Bond and Doug McKay in tandem with Michael Whalen, a team with experience working on THE ZODIAK, SHUTTER ISLAND and THE BLACK SWAN, comes a new horror film franchise based on the infamous house and property known as The LaLaurie Mansion – one of the most haunted houses in the world. Despite there being no public access inside the property since 1932 (for a reason!), thousands of people travel to New Orleans each year just to get a roadside glimpse of the notorious home. It has captured the imagination and curiosity of everyone who’s heard its disturbing story. 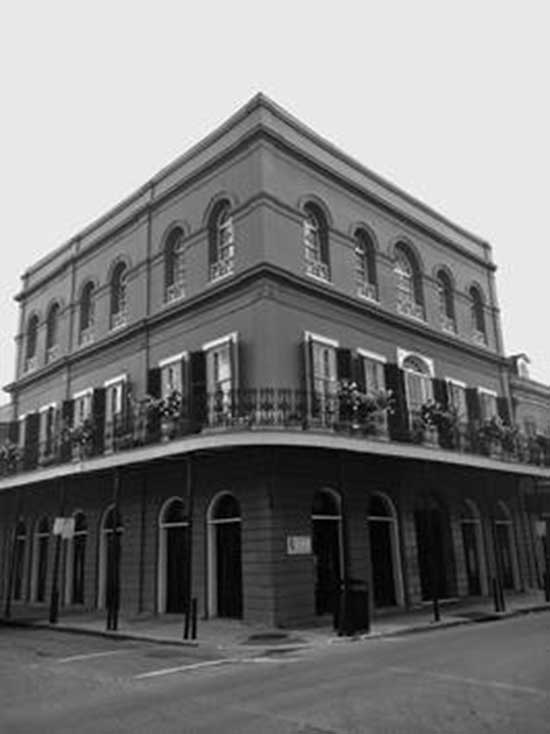 The stories will unfold in multiple installments covering the history of the house from recent horrific events of modern day all the way back to the terrifying origins of the house’s history and its crazed owner, Madame Delphine LaLaurie.

Though well known in popular culture the infamous Madame LaLaurie has never been given the detailed, extensive deep dive that this film has planned, including the exclusive right to the home itself.

The house and property’s haunting has been made infamous thanks to Madame LaLaurie, a New Orleans socialite and serial killer who tortured and murdered enslaved persons in the house. On the outside, she was the center of attention – beautiful, wealthy, and famous in the town, and known for throwing extravagant parties. Unknown to most, her house had secret rooms and passages where horrific nightmares came to life.

In 1834, an enslaved person chained to the stove set the house on fire, fearing her fate would end on the third floor of the house, where many of the victims would be led to never return. Firefighters discovered the horrors in the hidden rooms on the third floor and Madame LaLaurie fled the city, never to be seen again.

Being one of the most active paranormal sites in the world, the public has no access to the house, nor are there any tours inside the premise. However, Faster Horse partner, Michael Whalen, purchased and owns this house.

The Hayes Brothers are entertaining the idea of writing the first draft in the house, and the production intends to shoot some of the film on-site as well, including an extensive amount of behind-the-scenes footage, giving the public an intimate look into the terrifying house that has captured the attention of many.

Principal photography will commence in 2020.

The LaLaurie Mansion films will be jointly developed and produced by Chad Hayes and Carey Hayes, Doug McKay, Cindy Bond and Michael Whalen. Joshua Ryan Dietz and Dylan Bond will serve as executive producers. Local historian Andrew Ward is consulting on the project.

Said McKay, “The LaLaurie Mansion is as scary a place as there is in the world and we won’t hold back in giving audiences the full effect. Chad and Carey will have their hands full, but they are true masters in cinematic retellings of disturbing material. We wouldn’t want this diabolical material in the hands of anyone else!”

Said Bond, “Building a horror franchise starts with the IP, and for us to be able to tap the LaLaurie Mansion, and its twisted history, is a major coup for Faster Horse. Put in the hands of such gifted storytellers like Chad and Carey, we feel there are many chapters to tell – one frightening occurrence after the next.”

Said the Hayes brothers, “We love writing films in which we get to tell true stories – incorporating moments that people can look up and discover did in fact happen. With the LaLaurie House we get to do exactly that… there is a wealth of documentation of a very dark and frightening past of true events. Not to mention that after spending some time there, what we personally experienced was truly unnerving. We haven’t been this excited about a project since the Conjuring!”

The LaLaurie project will be the second film project from Faster Horse. The company, launched just last month by prominent producers Cindy Bond (“I Can Only Imagine”) and Doug McKay (“What to Expect When You’re Expecting,” “Zodiac”) revealed its debut film project would be Tate Taylor’s AMERICAN PAIN. Taylor adapted a screenplay from John Temple’s bestselling book and will direct the story of the king of the Florida pill mills and their rise to being the largest opioid pill mill in the country, which was ultimately busted by the FBI.

Faster Horse Pictures is a company dedicated to developing, financing and producing motion pictures and television content that live at the intersection of prestige and commercial appeal. Headquartered in Los Angeles, Faster Horse has the ability to swiftly join creatives and producers to provide the support needed at nearly any point in the production process. From providing development funding to arranging production financing and producing projects from start to finish, Faster Horse supports creatives by bringing to life the stories they care about most.

The company will develop/finance/produce anywhere from three to six projects a year, with a mandate to serve as a top-tier supplier of mainstream projects for both studios and major streamers. Budget ranges of the films on the Faster Horse slate vary depending on the size and scope of the individual projects. Above the financing of material, the company will be devoted to fostering an artist-friendly environment for filmmakers and talent.

Cindy Bond is a globally recognized pioneer in the distribution, production, sales, marketing and finance world of faith-friendly content, having worked on over 200 films. In 2002, Bond co-founded theatrical distribution company Promenade Pictures with former Paramount Pictures President/MGM/UA Co-Chairman Frank Yablans. In 2008, Bond founded Mission Pictures International, where she spearheaded and produced the 2018 breakout hit “I Can Only Imagine”, which shattered industry box office predictions to take the #3 spot at the U.S. box office in its first two weeks of release. “I Can Only Imagine” grossed over $83.4 million at the U.S. theatrical box office and earned the coveted A+ Cinemascore. Bond’s Mission Pictures International remains intact and will operate as a specialty production and int’l sales banner.

Doug McKay served as Vice President of Production and Development at Mike Medavoy’s Phoenix Pictures for a decade, working as a production executive on such acclaimed projects as “Shutter Island” (directed by Martin Scorsese), “Black Swan” (directed by Darren Aronofsky) and “Zodiac” (directed by David Fincher). McKay also developed and produced “What to Expect When You’re Expecting,” starring Cameron Diaz, Jennifer Lopez, Elizabeth Banks and Chris Rock. After Phoenix, McKay co-founded Rubicon Entertainment and led the company for four years.