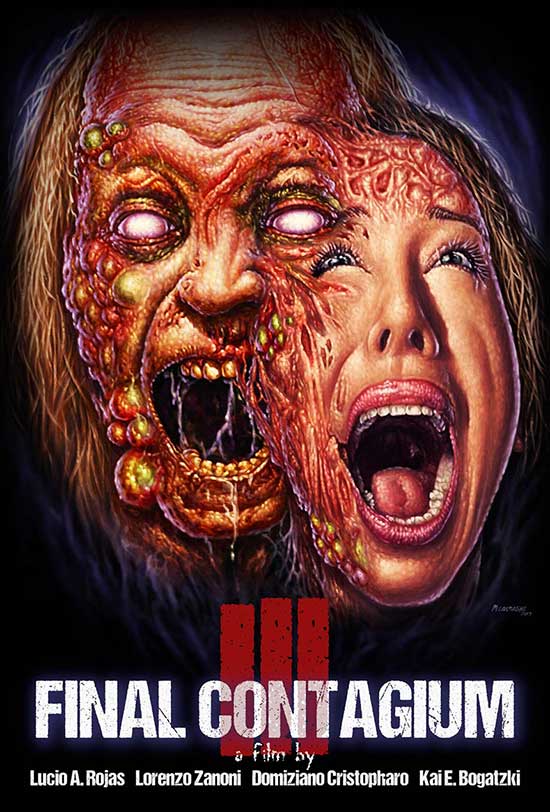 A viral pandemic ravages the planet in the first trailer of ILL – FINAL CONTAGIUM, headed to AFM this week

An experimental virus created by a mad scientist in Chile is spread throughout the world by contaminated money. We follow the effects of the deadly infection through different countries: in Italy, a thief steals some contaminated notes from an immigrant, becoming deadly ill; in Kosovo, a transsexual endures extreme surgeries after being infected; in Germany a father is desperate to save his contaminated son.

5th November 2019, Los Angeles – The production of ILL – FINAL CONTAGIUM has just released the first trailer for its new horror anthology about the effects of an experimental virus. The trailer doesn’t spare any blood and gore, and splatter fans will be pleased to know that’s just a small taste of what’s in the movie.

Divided into four episodes, directed by Lucio A. Rojas (THRAUMA), Domiziano Cristopharo (RED KROKODIL), Kai Bogatski (SCARS OF XAVIER) and Lorenzo Zanoni (A TASTE OF PHOBIA), the movie revolves around a new viral weapon created in Chile by a crazed scientist and spread by contaminated money. The different episodes follow the effects of this viral infection through Italy, Germany and Kosovo. Ximena del Solar (THRAUMA), Chiara Pavoni (XPIATION), Tommaso Arnaldi (HYBRIS), Felipe Rios (THRAUMA) and Max Evans (BLOOD FEAST) star in the movie, produced by Sandra Arriagada with Rojas, Bogatski, Zanoni and Cristopharo. ILL – FINAL CONTAGIUM will be introduced to the international market later this week at the American Film Market of Santa Monica by sales agency EuroObscura.

EuroObscura will also bring to Santa Monica STOMACH, the new horror film helmed by Italian director Alex Visani. Produced by Empire Video and Italian label Home Movies, STOMACH is a graphic and visceral body horror in the vein of David Cronenberg movies from the Eighties. The official, gut-churning trailer has just been released by the producer. International sales agency EuroObscura will be in Santa Monica to handle sales for both titles.