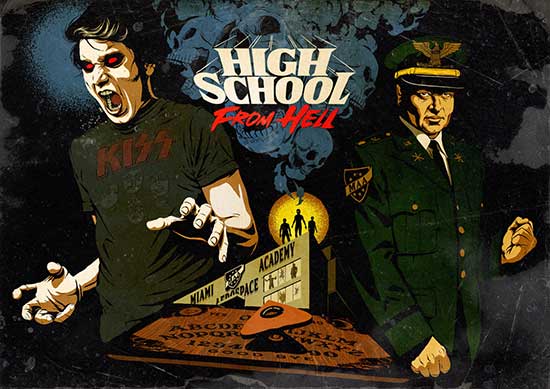 A true horror story published today has lifted the lid on one of America’s most chilling paranormal events. “Hysteria High” is an in-depth investigation into a mass demonic possession at the Miami Aerospace Academy, a.k.a the “High School from Hell” – that will pique the interest of any horror fan.

Forty years ago this week, a riot broke out at the Miami school where hundreds of screaming students claimed they were possessed by evil spirits. It has been described by scholars as “one of the most bizarre chapters in the history of American education.” Doors were snapped from their hinges and dozens were injured. The article, featuring interviews with former staff and students, reveals a school overwhelmed with black magic, murderers, and even a Nazi teacher.

In this genre-bending combination of horror and true crime, journalist Jeff Maysh (The Murder House) uncovers the dark secrets behind the Miami Aerospace Academy, with original concept art by Butcher Billy (Black Mirror, Stranger Things, Dawn of the Dead).