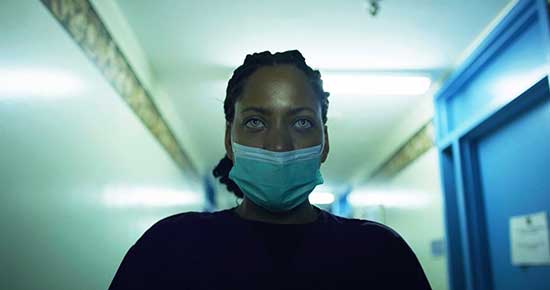 We have several films this year that we think will be of interest to your readers such as our Midnight section films JALLIKATTU (Dir Lijo Jose Pellissery) and SAINT MAUD (Dir Rose Glass), as well as Brazil’s BACURAU starring Udo Kier from our World Cinema section.

Tickets can be purchased starting tomorrow, October 30 at fest.afi.com/tickets/.

BACURAU – World Cinema
The inhabitants of a remote Brazilian village realize that their town has been erased from the map. When the water supply is cut, cell-phone coverage fades and a local family is murdered, it becomes clear they are under attack. Tension explodes into war as the community bands together, determined to survive the assault. DIR Juliano Dornelles, Kleber Mendonça Filho. SCR Kleber Mendonça Filho, Juliano Dornelles. CAST Bárbara Colen, Sonia Braga, Udo Kier. Brazil, France

In the tropical Indian state of Kerala, a buffalo escapes. Soon, all hell breaks loose as an entire village tries to wrestle it under control. A teeming world of base human behavior is also unleashed in this unique, adrenaline-fueled, brilliantly assembled and highly experiential spectacle that pulsates with energy from start-to-finish.

THE HISTORY OF MONSTERS – Conservatory Showcase