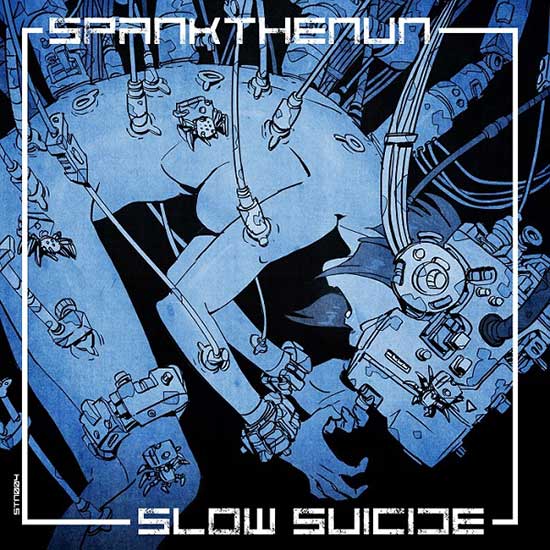 Electro-Industrial artist SPANKTHENUN is pleased to announce the release of their new lyric video for “Slow Suicide (Assemblage 23 Remix).”

For fans of: Nine Inch Nails, Ministry and KMFDM

““When we sat down to conceptualize the video for “Slow Suicide,” we knew we wanted something that would stand out and not be the same as what everyone is used to these days. We also knew we wanted to tap into the meaning and social themes in the song. On the surface the song is about suicide, but a slow suicide. We may not be intending to kill ourselves but the things we do day to day ultimately will lead us down that path of death.

We are our own worst enemies when it comes to what is good or bad for us. Also, we wanted to play on the digital implications of social media, and the selfie generation that we are all a part of and contributing too. We always liked the idea of creating something akin to a snuff film.”
– Eric Hanes (SPANKTHENUN)

SPANKTHENUN is an electro/industrial group focused on bringing big catchy beats, hooky synth lines and catchy lyrics to dark music. Sometimes you will get pulsing EBM designed to shake the club, like the collaboration with legendary EBM band Leæther Strip, “Rotting Meat (Mind Control).” Or you will get an old-school Industrial beat programmed like a trap/hip hop beat with a vocal track reminiscent of early goth and industrial records from decades past, like “The Clock” off of their initial release Regression Complex now on Spotify and iTunes.

SPANKTHENUN doesn’t plan to release music in the traditional cadence of single, single and then album. SPANKTHENUN will release smaller EPs and singles like “Slow Suicide” to highlight themes and concepts of future releases like the planned December release; the full-length album, Initial Decay Control. No filler here, all meat! Only massive beats!

Releases will also come via social media and YouTube or releases directly to radio shows. SPANKTHENUN will release videos and cuts of unreleased songs and then will pull them from the public forever. Right now you can hear exclusive remixes only through certain playlists on streaming services and on YouTube.

The bootleg is back! SPANKTHENUN will release unofficial remixes and reconstructs of other musicians songs too. Right now you can hear the blistering club banger of GOD MODULE’s – “First Last Wish,” unofficial, not approved, reworked and re-imagined by SPANKTHENUN… only on social channels.

SPANKTHENUN is working with some of the most respected names in the Industrial/EBM/Electro business, as well as hip hop and EDM/House producers to develop a unique energetic and exciting new sound.