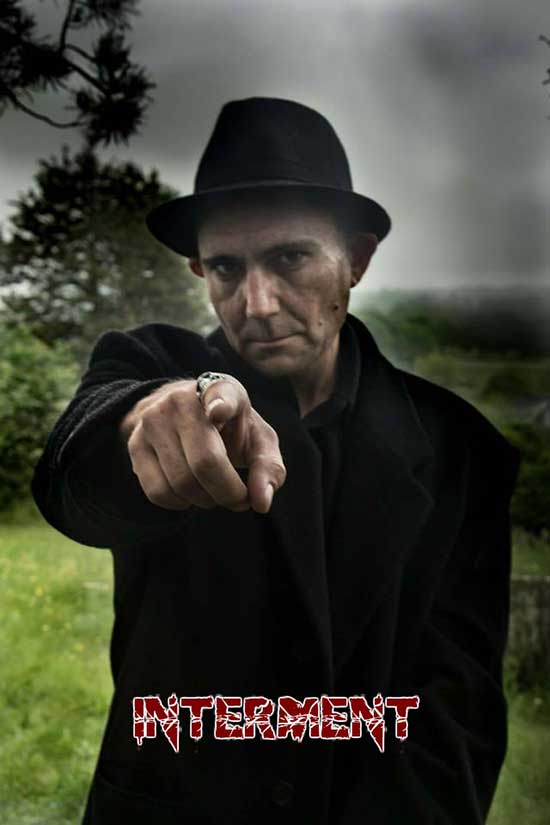 Hi Sean, Happy Friday the 13th! It is a holiday for the Horror community!

Sean- We have a full moon tonight too!

And the HAUNT movie is out too!

Sean- Eli Roth did that one?

Yes, it was excellent. Eli produced it and Scott Beck and Bryan Woods directed and wrote it.

Cool! You will like it. Tell us about the movie you wrote and directed, Interment?

Sean- Interment… The film that I wrote last year and set off to do. I’ve been acting in films six years prior to that. Along the way I’ve been picking up different aspects of filmmaking. I’ve always wanted to do one of my own. When the time came it had to be a horror movie because I was raised on the stuff since I was a kid. I’ve been a big fan of the genre. I put the project together last year, I reached out to a bunch of people that I worked with throughout the years. I kind of handpicked the people that I liked working with the best and the people I trusted. I wound up putting a crew together which became MDMN Films. The production team I put together in pretty much the same fashion. Then we put the film together. It took about three months and we didn’t have a definite shooting schedule.

That was a smart way to go and probably made it a little less stressful for you. Do you feel it was easier doing this sort of on your own?

Sean- On the one hand I would say that certain things were easier and other things were not. I think the results were good. It was very much a family type of deal. 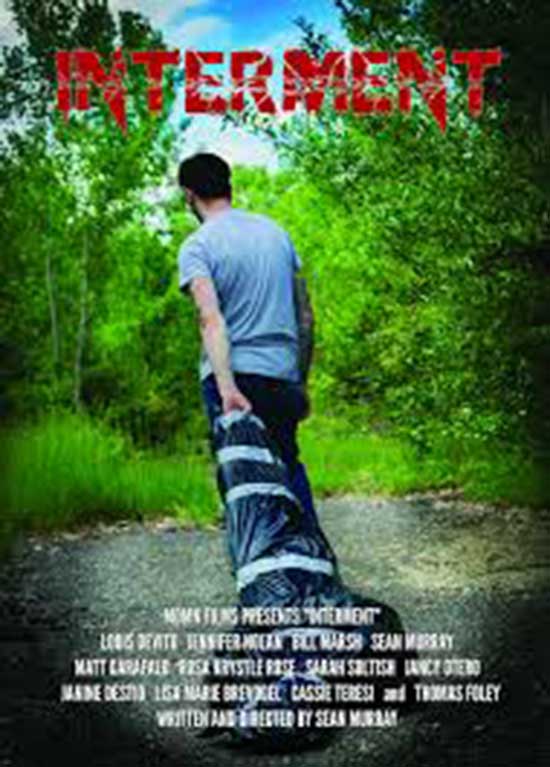 Tell us about the Man in Black. I felt drawn to you guys at the Horror Sideshow Market. It is fascinating and this character seems different.

Sean- Thank you. The character in the movie. It is kind of a surreal horror film. It follows a serial killer who is being pursued by a corrupt cop. The Man in Black exists in an afterlife if you will. It’s not heaven and it’s not hell. It is someplace in between. There’s different levels to the afterlife in this. He is somebody that people will see when they pass. I wanted to keep the character very much like the old school style of the Hammer films. To give him more of a classic look which I feel is lacking in modern horror movies.

I don’t want to say some of the films have completely lost what is needed but some things are indeed lacking.

Sean- I was trying to go for a classic feel. 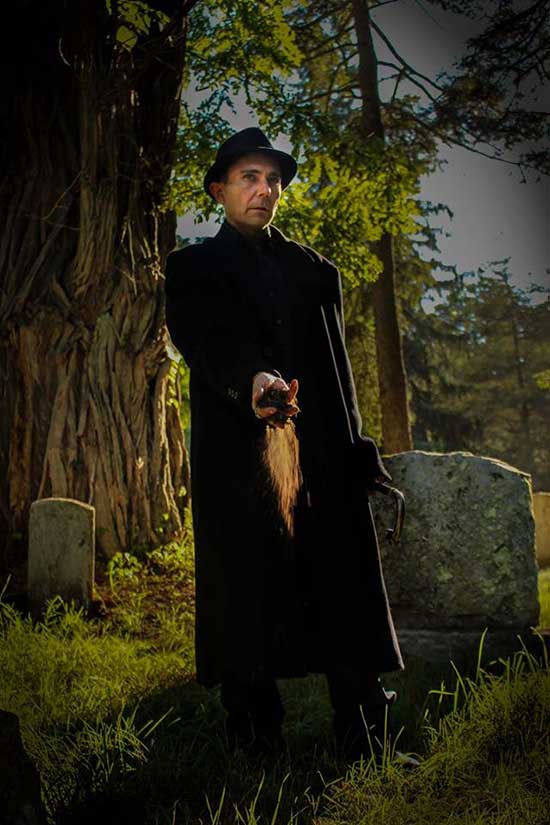 Did you grow up watching horror movies and did you always know you wanted to be in this business?

Sean- Absolutely. My mom took me to see “Texas Chainsaw Massacre” in the drive-in. I don’t remember that but I do remember you know on Channel 11. I would watch all the Universal movies and “Phantasm” struck me when I was probably about six or seven years old. I grew up in the eighties and that was probably the golden age of horror. All that stuff, Freddy, Jason and Pinhead. I totally grew up on Fangoria magazine. I wanted to do it for a long time. I am fortunate right with technology.

I was sort of thinking about the Tall Man, Angus Scrimm in “Phantasm” when you look at the Man in Black. It was fascinating to me. It’s like you paid homage. I grew up watching Horror movies and loved them. My house was always the place to watch horror movies. My mom (she was a nurse also) is an artist and she looked at everything as art and I wasn’t allowed to watch them at my friends’ houses because you know, you may turn into a serial killer or something. But, the horror fans and the community are some of the most incredible people. 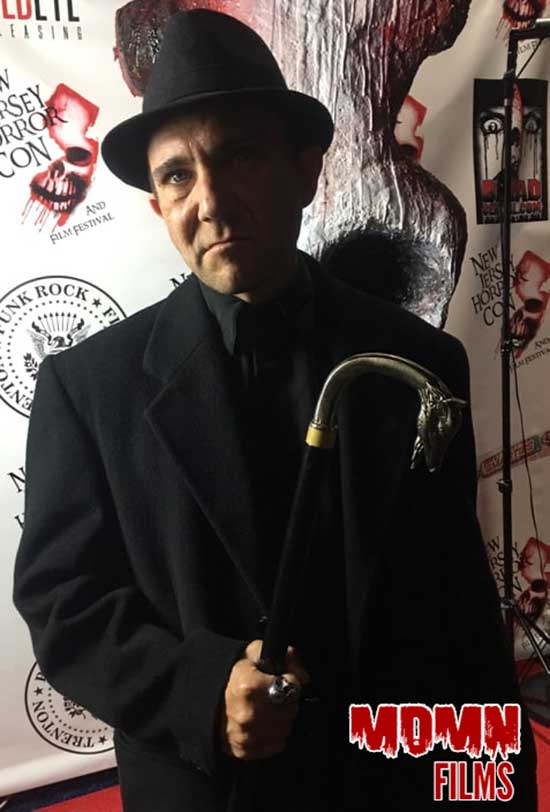 Sean- Yeah. I can relate to that. When I was growing up, it was the same way. Some of my friends were into it but not all of them. It was all about making art. A far as the Man in Black and the Tall Man that would definitely be an inspiration there.

I love “Phantasm” and I grew up watching “The Hitchhiker” and “The Addams Family” and more.

Sean- The HBO show, “The Hitchhiker.”

Sean- That one still held up. “Tales from the Crypt” was huge with me. I have the comics.

Tell us about the directing process and what was it like working with this cast?

Sean- For me it was relatively easy. I’ve been working on movies for I would say, six years now. I started by doing voice acting. When it came time to direct, I expected a whole lot of problems and I hate to say it but it was a relatively painless process for me. I think it had everything to do with the cast. I took on people that I trusted and people that I’ve known. There was only one person that was new to the fold. I would say the process for me was pretty easy. I gave people a lot of room to interpret the characters. If they needed a little bit more work, I’d talk to them about it.

It sounds like you had a good game plan. 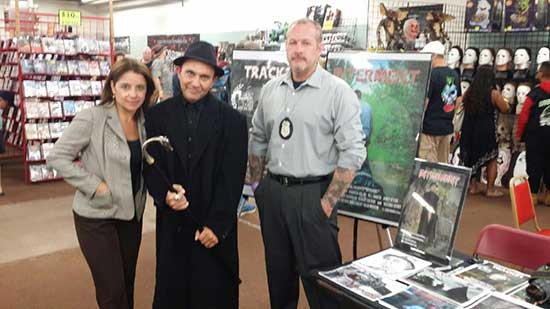 Where can everyone find the movie?

Sean- The movie is currently available on DVD. We debuted it at the Hoboken Film Festival. We have an ad in SCREAM magazine. We are hitting up the convention circuit where we saw you at the Horror Sideshow Market. We are going to be at Chiller Theatre in New Jersey and I believe we are either going to be doing the New Jersey Horror Con and Film Festival in Atlantic City or Rock and Shock 2019 in Massachusetts? I’m not sure which one of those we will do next. It is out and it is available.

What do you want to say to the people who will be watching Interment?

Sean- Well, The less… the better. I’d rather have people interpret their own way. I want to keep it open to hear what other people have to say. 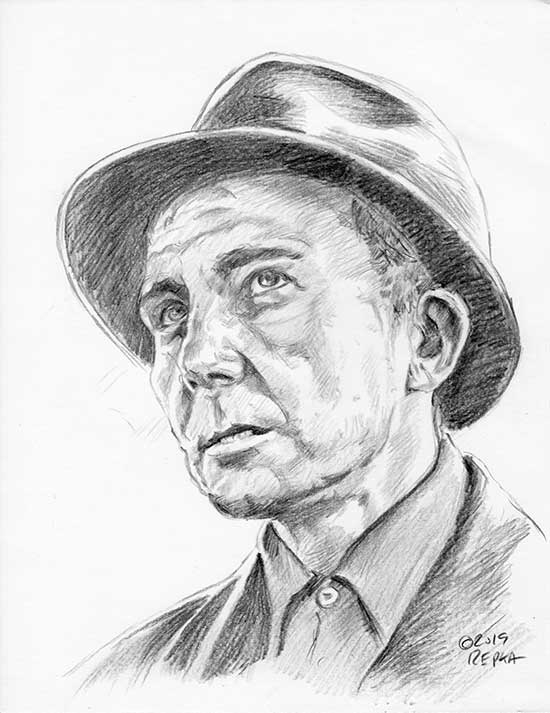 I thank you so much for taking the time to talk with Horrornews.net

Check out all of Sean’s info and Social media. 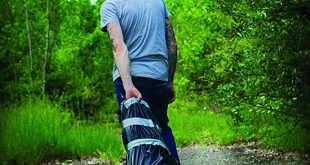