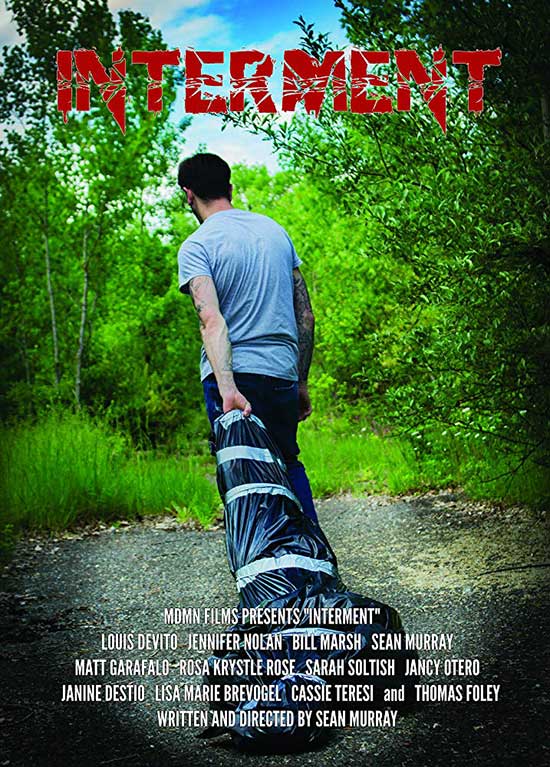 “Enter the twisted and surreal world of Interment – where nothing is as it seems and no one is safe. Writer/director Sean Murray delivers this blood-soaked tragedy which will leave you uneasy and disturbed. Detective Charlie Osmond (Bill Marsh) is in pursuit of a ruthless serial killer known as Scott (Louis Devito). What Osmond encounters along the trail pushes him over the edge of sanity. Dead bodies, a dark angel named Chelsey (Jennifer Nolan) – and the evil Man in Black. Experience the ultimate terror: Interment will shock and unnerve anyone who dares to keep their eyes open until it’s fatal end.”

Interment was written and directed by Sean Murray. Produced by MDMN Films. Interment opens with a nice couple sitting in a park. Chelsey (Jennifer Nolan) is talking about death. What do you think happens to us when we die? Isn’t that the ultimate question? Scott (Lou DeVito) has a realistic answer for her. Now, we find this happy duo, not so happy. Chelsea wants to leave Scott. He stabs her in such a calm manner.The dead girl meets the Man in Black (Sean Murray). He is the equivalent to Death, the Grim Reaper. He is poised, calm, cool and collected. She has questions as you would imagine most of us do. Will he answer her though? Scott casually strolling through the woods with Chelsey wrapped up in trash bags and duct taped. He throws her over his shoulder. He dumps her.

The Man in Black is explaining to Chelsey where she is. Meanwhile, Scott has a knife and some rope. What is he up to? Osmond (Bill Marsh) the stern, lurking detective finds Chelsey. Sommers (Matt Garafalo) is taking the crime scene photos.

Back to Scott. He is on the move. What is he doing now? He strangles a young woman in an alley in broad daylight. Osmond is on the move and ignoring Brenda’s (Rose Krystle Rose) phone calls. Scott delivers a bleak speech in the mirror. He is “dead inside.” Anna (Jancy Otero) shows up at his door, spots his creepy Chelsey photo he drew. 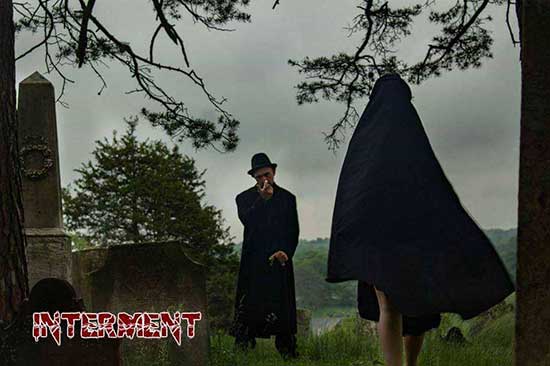 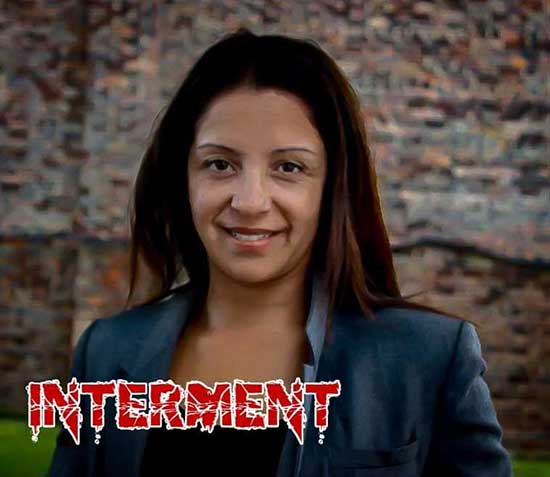 There are some good effects in the movie. Sean Murray and his crew did a good job.

Scott kills Anna. No one ever notices a serial killer shopping. Sandra Peters (Valeria Henry) goes back and forth with Osmond. They banter and threaten each other. They talk about jurisdiction and classified cases. Its two talented actors going back and forth. They feed off each other. Brenda is Osmond’s wife. She is mad at him and going to stay at her mothers. Osmond has a bit of an attitude problem.

Osmond and Brenda are having problems. Bill Marsh does a great job as a heartless cop. He goes back and forth tormenting poor Rosa Krystle Rose who plays his wife. Osmond knocks her out with his gun handle. Meanwhile, Scott is walking the rail road tracks with a bloody bag. Where are the people? Nobody ever sees anything? It is “just a movie” as they say. But, still even in real life people are kidnapped, hurt and so much more every single day. Sometimes no one sees anything. That is a scary fact. (Be vigilant people. Watch out for one another so serial killers don’t get you. #HelpfulHorror ) Scott left the bloody bag and walks away.

The Man in Black is advising. If you ever watched Poltergeist 2, Julian Beck plays Reverend Henry Kane, a scary figure that may have been a representation of death or at least trying to scare the ever living sh*t out of people. Julian Beck was incredible as Reverend Kane. There hasn’t been a character to come close to Reverend Kane. Sean Murray seems to play a little bit with the Man in Black. The noticeable mannerisms and the voice. Also, Angus Scrimm’s legendary Tall Man from Phantasm. Sean Murray plays this character well.

The Man In Black is talking to the dead girl again while she holds a bloody head. “Scott is lost.” Oh, there is some sneaky moments happening now with Scott and Osmond. This movie is different. There is a steady pace, the storyline is well thought out. It starts as a cat and mouse game but there is a twist. You don’t quite expect what happens. The Detective is watching and being creepy.

He has a plan. It’s a sick deranged plan but its his plan. Sean Murray does a good job with the various shots, the locations. Osmond finds Scott and there is a twist. Scott is trying to take a train and he meets the most optimistic girl ever. Osmond bust that mood right away. Osmond wants Scott to kill after calling him a “regular Richie Ramirez.” (Richard The Night Stalker Ramirez.)

Well, a few twists and turns. Interment was a different film. The Man in Black is still collecting visitors. Make sure to check out Interment