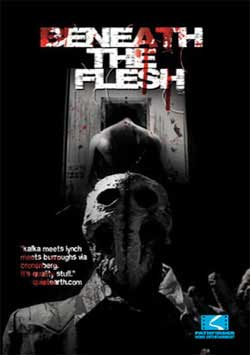 Randall Kaplan directs this menagerie of darkly disturbing shorts that explores how various victims grapple with their worst nightmares, beginning with “Id,” the story of a man who’s simultaneously tortured by love and a mysterious being. Other tales include “The Basement,” in which two men stage a confrontation underground; and “Boxhead,” in which an old man reunites with a familiar face from his past.

Surreal, dreamy, nightmarish and full of deep dark philosophical visuals that are tied to a metaphorical and personal foretelling of shorts that wave over you quickly with the force of a restless night and deep seated demons within. Randall Kaplan has compiled a very cool collection of his 5 short films into the feature called “Beneath The Flesh”. Each is black and white without limited dialog and carefully planned for maximum impact.

Some will come out of this with a very art-house residual that sticks to there gut like sour milk. Thesour milk though in this case is intended with the often surreal presentaions that play out on screen. Kaplan paints images of lonely souls who are often agitated, paranoid, stressed out, lonely and anxiety-filled. The purpose? What I got out of it was that the shorts all seem to reference the demons within, the murderous impulses and the beast emerging. Whether the appearance of dark monsters is meant to be literal of metaphorical is really a matter of the viewers perspective. Though every time one appears it’s up to no good and seems to influence the actions of the individual. So in essence the demon appearances might be just a psyche manifestation that the suffered characters are playing out in there anxiety fits.

This is indeed a showcase of 5 brooding fantastical shorts with heavy influences by Quay, Lynch and even Cronenbreg at times. One particulary short called “The child” could easily be mistaken for a “Tool” video, though Kaplan has his own unique way of dealing with claymation nightmares. Beneath the Flesh stars actors Michael Whitney and Steve Arons

The first short “Boxhead” accents a lonely man’s delusions brought on by some child hood traumas that come in the form of a tormented creature. Even the act of leaving his apartment is a release and anxiety filled situation to deal with. His hallucinations become more and more overwhelming to his mental demise.

The Basement” has 2 men confronting each other on a dark lit staircase. The dominant one subjects the lesser to humility and overpowerment. While the message might be a but askew… I interpreted this as one who has to face ones own fears. The fear getting the best of them leaving them naked, weak and a victim of there own limitations. Fear the gloating beast that stands into he way standing just above them ..waiting for the individual to make a move and overcome it…but in this case, that individual is humbled and defeated.

“ID” centers on an individual who is haunted daily by a white faced ghoul who looks like a character right out of the film “Pulse”. As he comes home to his dismal apartment life, this ghoul seems to prod him on to do diabolical things.

There is alot of visual reference to intense emotions based on repressed fears that manifest out of dark thoughts. In fact, these emotions much like “Lynch” would do, take on manifestations that come to life from these very thoughts. While the influences are clear, you effort put forth on this project was really well done. Music tracks also provide a solid base of solemn tones and musical despair.

One of the obvious high points of this production is the creepy use of lighting. High contrasted, shadowed sets, and carefully placed angles almost puts the lighting use in “Beneath the Flesh” as a character on it’s own. There’s enough variety to keep the segments as their own entities and the visual aspect is pretty cool. This film is not to be digested in the usual mainstream manner but to be taken in stride as an artistic experiment and journey into darkness.

If your a lover of short films, this DVD makes a nice collection of pieces. The whole production was written and directed by Randall Kaplan…so its his world you’ll be sucked into. I’m a fan of these type of projects and wish there was more available to check out. It’s definitely a horror genre focused work that is highly enjoyable and appropriately hypnotic

Tags Beneath the Flesh