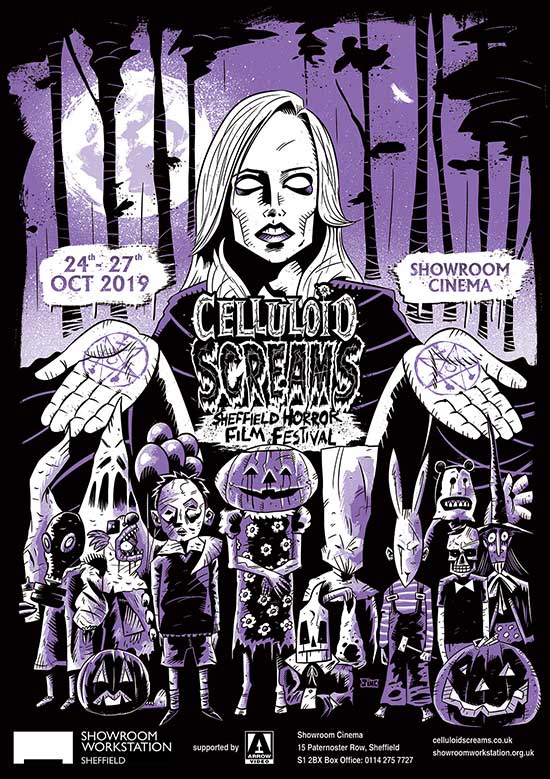 Celluloid Screams Horror Film Festival has been delighting film fans since 2009, delivering shocks and scares with the very best in new and classic horror cinema from around the globe. The eleventh edition of Celluloid Screams runs from the 24th to the 27th of October 2019 at the Showroom Cinema, Sheffield and will present 17 feature films, each with an accompanying short film.

After losing her job and ending her latest dysfunctional relationship, a young woman rents a country house for a weekend getaway but soon falls foul of the house’s owner, an embittered widower (Robert Patrick) whose psychotic tendencies are veering dangerously out of control.

GIRL ON THE THIRD FLOOR

Don (played by former professional wrestler Phil “CM Punk” Brooks) attempts to renovate a rundown mansion with a sordid history for his growing family, only to learn that the house has other plans in this highly unconventional take on the haunted house film.

ANTRUM: THE DEADLIEST FILM EVER MADE (UK PREMIERE)

ANTRUM is a feature-length film shot in the late 1970s. A string of bizarre incidents surrounding the film, including a blaze at a cinema screening in Budapest in 1988 resulting in the deaths of 56 people in attendance, have contributed to the belief that the film itself is cursed. After a riot at a screening in San Francisco, the film vanished without a trace. Else Films has successfully located the only known copy of the film in existence. This is that film.

Rose, a sweet and lonely small town driving instructor who must use her supernatural ‘talent’ to save the daughter of a local man from a washed up rock-star looking to use her in a satanic ritual that will reignite his fame.

The festival’s annual tradition of secret screenings continues in 2019. This year we present two mystery movies that are revealed to the audience mere moments before they begin.

A teambuilding exercise in a cave system in New Mexico goes horribly wrong for a group of employees in this hilarious horror comedy from the director of Creep.

A young couple on holiday in Australia make the mistake of deviating from their itinerary and an unplanned excursion to Ayers Rock leaves them stranded at the mercy of the Australian outback.

When a celebrity couple famed for their YouTube scare-prank channel are invited to a friend’s converted church in the countryside for a weekend getaway, a series of startling events unfold that spiral them into an inexplicable nightmare.

Set in 1825 in the British penal colony of Van Diemen’s Land (now the Australian state of Tasmania), ‘The Nightingale’ follows a young convict woman seeking revenge for a terrible act of violence committed against her family.

Thirty-something hipster Norval Greenwood (Elijah Wood) travels to the coastal home of his estranged father to reconcile their past, but soon discovers the real reason for his father’s impromptu invitation.

A brilliant painter facing the worst creative block of her life turns to anything she can to complete her masterpiece, spiraling into a hallucinatory hellscape of drugs, sex, and murder in the sleazy underbelly of Los Angeles.

WHY DON’T YOU JUST DIE!

Andrei, a detective and the world’s most horrible father, brings together a terrible group of people in his apartment: his resentful actress daughter, an angry thug, and a cheated cop. Each one of them has a reason to want revenge in this frenetic, hyper-violent horror thriller.

For small-town bar owner Hank (Jeremy Gardner), his 10-year relationship with Abby (Brea Grant) has been storybook-quality. Abby, however, wants more: marriage, to be exact, which Hank doesn’t seem ready to initiate anytime soon. As a result, she leaves him without so much as a note or any subsequent communication. Hank is crushed. Even worse, Abby’s departure seemingly triggers the arrival of an unseen monster that claws at Hank’s front door at night. As the nocturnal threat intensifies, Hank must figure out how to not only save his relationship, but also himself.

The second of two mystery films for Celluloid Screams 2019. Previous years have seen sneak peeks and premieres of Paranormal Activity, The Autopsy of Jane Doe and Almost Human – the only way to find out what’s in store is to buy a ticket.

A washed-up musician teams up with a kindergarten teacher and a kids TV personality to protect a group of young children from a sudden outbreak of zombies.

Weekend passes covering entry to all films and events at the festival are on sale on now via www.showroomworkstation.org.uk/

Individual tickets for all films go on sale on Saturday 28th September at 12 noon. For full details of the film programme (including our 2019 short film selections) and schedule please visit: www.celluloidscreams.co.uk