TRAVEL CHANNEL REVEALS A TOWN’S DESCENT INTO MADNESS AND

THE TRUE STORY OF AMERICA’S MOST INFAMOUS WITCH HUNT IN NETWORK’S FIRST DOCUDRAMA, ‘WITCHES OF SALEM’ 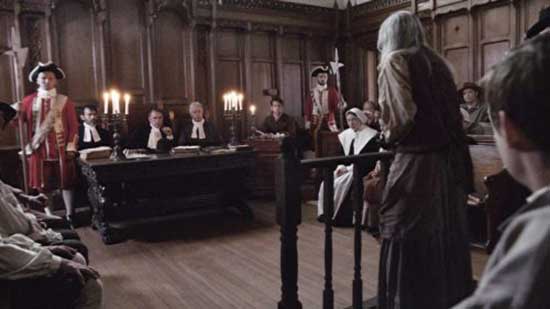 At a time when “witch hunt” has burst back into our national vocabulary, Travel Channel presents a terrifying chapter in America’s history, the relevancy of which cannot be overlooked in the four-part docudrama, “Witches of Salem,” beginning on Sunday, October 6 at 10 p.m. ET/PT. In examining the mass hysteria that gripped Salem at that time, the series reveals how extreme beliefs can completely change how communities collectively think and, in this case, fatally act. Based upon original transcripts from witnesses at the Salem Witch Trials and layered with expert interviews from historians and authors, “Witches of Salem” unravels the true story of palpable evil that the residents of this otherwise sleepy Massachusetts village endured in 1692. From reports of possession by the devil, to mass arrests, sensational trials and public hangings, each hour-long episode is an in-depth account of the eight months of fear, panic and horror that overtook Salem, revealing the truth behind this dark legacy in America’s history.

“Travel Channel was ready to make the leap into a docudrama, and ‘Witches of Salem’ feels especially prescient at this time,” said Matthew Butler, general manager, Travel Channel. “‘This miniseries provides a fascinating look back in American history where ‘witch hunts’ were fatal affairs, serving as a stark reminder of how susceptible and vulnerable communities can be due to preconceived notions.”

When Puritan minister Samuel Parris’ daughter, Betty, becomes afflicted with unexplainable fits, doctors try everything they can to heal her. But after medical measures don’t work and the affliction appears to spread out of the Parris household to other young girls in the community, they assume that the cause is something far more sinister. Betty’s claim that Parris’ indentured servant, Tituba, was a witch and responsible for her suffering, started a mass hysteria that led to 20 men, women and children being killed in connection with the Salem Witch Trials. From 4-year-old girls to elderly women, from poor to privileged members of society, no one was safe from being named as a witch by the afflicted girls, whose words became more trusted than anyone else’s in the community. “Witches of Salem” captures the events that unfolded and put the New England community under siege, as the delusion of demonic conspiracy spread.

For the bold, daring and spontaneous; those adventurers who embrace the thrill of the unexpected; those risk-takers who aren’t afraid of a little mystery; if you’re up for anything, down for whatever, and above all, love great stories, journey on to Travel Channel. We’re more than you expect and everything you didn’t know you were looking for. Reaching more than 82 million U.S. cable homes, Travel Channel is the world’s leading travel media brand. Fans also can visit Travel Channel for more information or interact with other fans through Facebook, Twitter, Pinterest and Instagram. Travel Channel is owned by Discovery, Inc., a global leader in real life entertainment spanning 220 countries and territories, whose portfolio also includes Discovery Channel, HGTV, Food Network, TLC, Investigation Discovery and OWN: Oprah Winfrey Network.