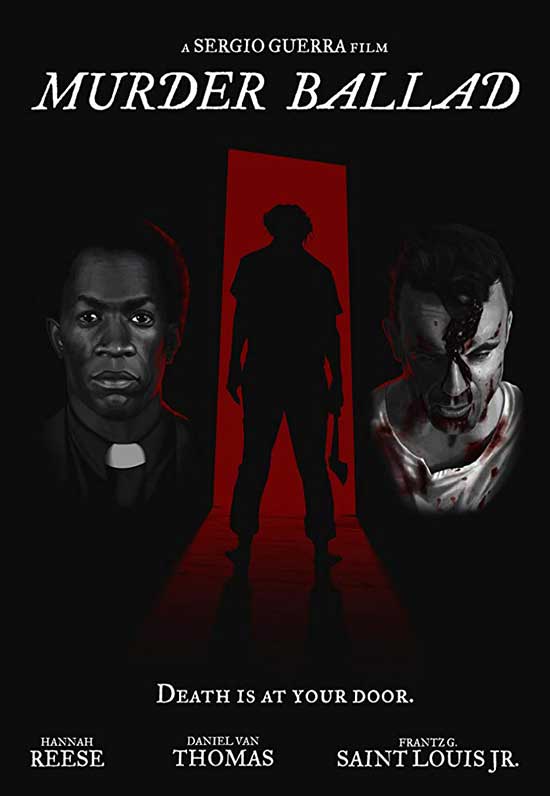 As an abused wife tends to the post-robbery wounds of her criminal ex-husband, they are visited by a mysterious – and malevolent – preacher.

More short films, kiddies! Today we have MURDER BALLAD, written and directed by Sergio Guerra. This appears to be Mr. Guerra’s directing debut, although some may recognize his name from his long-time work on the television show THE SIMPSONS.

Our story opens on a woman called Lucinda (Hannah Reese) digging frantically through her bathroom drawers looking for…something. She’s obviously in a panic. But her search is interupted by the arrival of a mysterious man, who introduces himself as Deacon Ankou (Frantz G Saint Louis Jr). Lucinda doesn’t know him, but the good Deacon apparently knows her.

The deacon asks after her husband, Burgess (Daniel Van Thomas), but Lucinda says she hasn’t seen him in years. Ex husband, it would seem.

But she lied to the Deacon, as Burgess is actually in the next room bleeding from a failed robbery at a local shop. We know this because he gets pretty irate that Lucinda opened the door with his ill-gotten loot in plain view.

Burgess is looking pretty rough for his experience and it is apparently Lucinda’s duty to patch him up. That is what she was searching for in the bathroom – medical supplies. Burgess isn’t a very good patient, though. Not a very good person either, quite frankly, as we soon learn.

The film has a great atmosphere, everything from the lighting and staging to the original score, created by J. Phillip Wilkins. Some really nice wound work as well. If I’m reading the credits correctly, the wounds were created by Ally McGillicuddy and her IMDB listing for make up work is a mile long. A lot of really amazing work behind her, and she brought just as much good stuff to this production as she has to any other.

This is a really good short film all around, on every level it can be. The acting, the effects, the lighting, the sets, it just knocks it out of the park. Honestly, I’d be interested in a feature length story based on the Deacon. There’s so much more to tell about that guy.