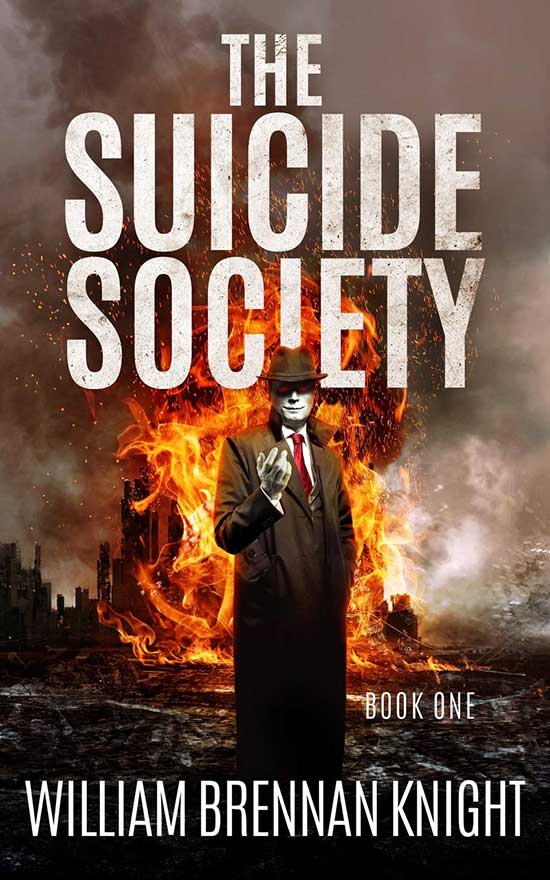 Zach Randall is a complacent, self absorbed accountant that is all but given up on life. In darker times he’s succumbed to his depression with attempts to take his own life. His most recent failed acquisition into the abyss unveils something profound. Randall discovers he has visions or premonitions of complete strangers in the act of ending his or her own life.

Initially he dismisses the interlude as coincidence or some sort of psychotic episode. As curiosity gets the better of him, he discovers the vision was true to life. His failure at intervention cost a very real person their final breaths.

While enlisting in the help of his support group leader, Jarad Anston the two pursue his next vision in a race against time to prevent the next suicide attempt. It doesn’t take long to realize there is something much more sinister at play. The Suicide Society is provocative, spell binding thriller that may very well make you question reality as we know it.

There is little more exciting to the avid reader than scanning the final paragraphs of an invested story and anticipating what exactly will reside on your nightstand next?

I think we’ve all been there before. Whether you prefer the brick and mortar locales and scan your genre of choice for your favorite author or scroll through the catalogue on your e-reader. Maybe you let your fingers to the walking in Amazon or even visit your local library.

Regardless of destination, one cannot deny the sense of exhilaration in selecting your next adventure. Yet in the odd, rare circumstance I firmly believe a book chooses us. At the risk of appearing all “new-agey”, I think the Universe speaks volumes and works in mysterious ways.

The Suicide Society spoke to me and arrived at just the precise moment I needed it to. I had endured a rather low point in my life for just over a couple of years. It had been a long time since I looked forward to much of anything and really began to lose focus. I’m not ashamed to admit that my mind did wander in some rather bleak directions.

Its evident author William Knight’s commitment to his craft in depicting a most foreboding atmosphere of despair within each of the vision scenes. It’s often stated the carnal rule of writing, is write what you know. I suspect Knight either did some most extensive research in conveying such emotion or quite likely has endured his own share of demons.

I found each passage cathartic or even therapeutic in a sense. A constant reminder that regardless of the situation, you are never alone.

There’s little room for debate that the subject content is of upmost sensitive or even controversial nature. As the plot begins to escalate, we are introduced to the antagonist known simply as The Benefactor. Illustrated in a contemporary society, the subtext of inner conflict and the struggle within will resonate among a vast reading audience.

Without indulging in too many plot spoilers, suffice to state The Benefactor swiftly unleashes evil personified by getting his minions to do his dirty work for him. While the lead protagonists Randall and Anston race against time and every obstacle conceivable a conspiracy of global proportion is gradually unveiled.

The Suicide Society is an original, fresh and unique premise with classic components of societal pressure, remorse and sin. Knight has a most gifted fashion in which his characters come to life out of the pages. While dabbling in little exposition we still get a true sense of what each individual struggles with. The empathy factors are naturally enhanced. Suddenly the reading audience is well invested into the lives of the characters on an almost subliminal, subconscious basis.

My prediction is you will see The Suicide Society adapted onto the screen. Whether full motion picture, mini-series or continuing program, the media is not of consequence. This is the type of tale that knows no bounds in terms of potential audience.

I can safely state I’m indebted for having opportunity to experience this tale in arguably the greatest theatre conceivable. My own mind. Readers curious on embarking upon this or other works of William Brennan Knight can safely rejoice as additional titles in the series include Rational Insanity, Kill It To Death and Mr. Cox Comes To Town.

Keep an eye on William Brennan Knight. The best is yet to come. I’d bet my life on it.