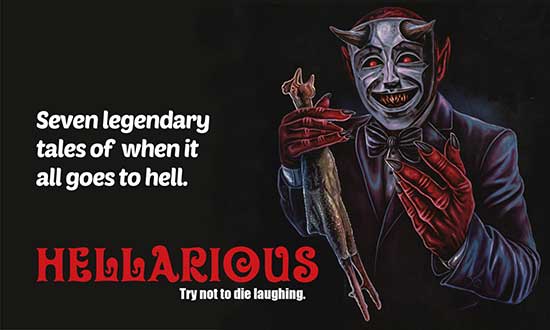 A new, devilishly funny collection of horror short films is out to kill with audiences just in time for Halloween … and there’s going to be hell to pay.

The just-announced feature collection Hellarious brings together seven of the most legendary horror comedy shorts ever made from some of the world’s best genre filmmakers. The tales include a hilarious menagerie of zombie wives, amateur satanists, reverse werewolves, maniac lunch ladies and more — along with gust-busting gags, gross-outs and gore.

Hellarious – Official Trailer from Hands Off Productions on Vimeo.

“Hellarious is the perfect movie to celebrate the Halloween season,” said anthology creator Jason Tostevin. “There are scary stories, eww moments that will make you squirm, and even some weirdly sweet moments. And of course, they’re all absolutely hysterical.”

The seven shorts that make up Hellarious are: Lunch Ladies by Clarissa Jacobson and J.M. Logan, Horrific by Robert Boocheck (ABCs of Death 2), Death Metal by Chris McInroy, Born Again and ‘Til Death by Tostevin and Randall Greenland, Killer Kart by James Feeney, Bitten by Sarah K. Reimers.

“We’re so proud to help present this one-of-a-kind project,” said FilmSpawn founder Chris Ethridge. “These are iconic shorts people have been hearing they have to see, but couldn’t find. Now, for the first time ever, you can see them all in one place.”

Also included exclusively on the limited edition Blu-ray is the world premiere of Clarissa Jacobson’s A Very Important Film, a parody send-up of self-important festival films created as a promotional short for her film Lunch Ladies.