Home | Frank Zappa’s Halloween Shows Recorded Live In 1973 In Chicago To Be Released!

Frank Zappa’s Halloween Shows Recorded Live In 1973 In Chicago To Be Released!

Throughout the ‘70s and ‘80s, the iconoclastic composer Frank Zappa put on a series of spectacular, now legendary, shows around Halloween each year to celebrate his favorite holiday. Before settling on New York in 1974 to host his annual costume-clad festivities, which would continue until he retired the tradition in 1984, Zappa, fronting an exciting new band, performed two rousing back-to-back Halloween concerts the year prior at the Auditorium Theater in Chicago. Whereas many of the NYC shows were not recorded due to the musician’s union charging exorbitant fees making it virtually impossible to allow Zappa to record the event, there were no such restrictions at the Chicago show – in true Zappa fashion it was of course taped. 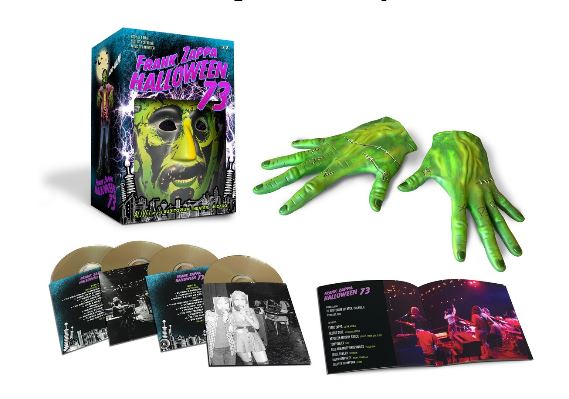 Now for the first time ever, Zappa’s two complete Halloween shows recorded on October 31, 1973 in Chicago, will be released on October 25 via Zappa Records/UMe, just in time for Halloween. These completely unreleased live recordings total more than four and a half hours and feature songs from across his prolific catalog, including his then just-released 1973 album Over-Nite Sensation and forthcoming 1974 record Apostrophe, as well as early arrangements of compositions like “Penguin In Bondage,” “Dickie’s Such An Asshole” and “Village Of The Sun” that would appear on later studio and live albums. Continuing the Halloween series that the Zappa Family Trust began in 2017 with the acclaimed Halloween 77 releases, Halloween 73 will be released as a specially designed, limited run four-disc costume box complete with a FRANKenZAPPA mask and gloves, housed in a display worthy box. Produced by Ahmet Zappa and Vaultmeister Joe Travers, the boxed set is rounded out with a 40-page booklet featuring detailed liner notes from Travers and Ruth Komanoff Underwood and Ralph Humphrey, Zappa’s bandmates who played in the shows, and a wealth of never-before-seen photos from the event.

The two full shows will be presented on discs 1-3 with the fourth disc dedicated to unreleased rehearsals recorded just before the tour started. A single CD version titled Halloween 73 Highlights, which collects together 16 handpicked performances from both shows, will also be available. The concerts were recorded on 1/2” 4-track analog tape which was stored in pristine condition in Zappa’s personal Vault. The tracks were digitally transferred in 96K/24B from the original analog tapes by Travers in 2019 and mastered and re-mixed by Craig Parker Adams. Both the deluxe boxed set and Highlights album will be available digitally for streaming and download.

Preorder for all versions is available now. All boxes preordered via Zappa.com will come with an instant grat download of the song, “The Idiot Bastard Son,” taken from the first show, as well as an additional track at a later date. Digital preorders of Halloween 73 will also come with the free downloads. Listen to “Idiot Bastard Son” now: UMe.lnk.to/Halloween73PR

After Zappa’s European tour that ended in September of ’73, the ever-restless musician decided to shake up his lineup once again and replaced woodwind and keyboards player Ian Underwood and violinist Jean Luc-Ponty with two new members: Chester Thompson on drums and Napoleon Murphy Brock who supplied vocals, tenor sax and flute. Following a month of rehearsals, the Halloween shows in Chicago marked the second gig for this new lineup. These recordings then represent the first official recording of this new configuration which as Travers writes in the liners, “would become infamous with the shows at The Roxy Theater scheduled for that December in Los Angeles and filmed for all posterity.”

Proceeding the Roxy performances, which can be heard in full on 2018’s The Roxy Performances boxed set, as well as the 1974 double live album Roxy & Elsewhere, it’s thrilling to hear the band dynamics and evolution. As Travers writes, “the music is fresh and going through changes, along with incorporating the new funky rhythms of Chester and the dynamic lead vocals of Napoleon. And with the mallets of Ruth Underwood prominently featured in the instrumentation, Bruce Fowler’s bionic trombone, Ralph Humphrey’s technical wizardry of the drum set, Tom Fowler’s command of the bass and the keyboard mastery of George Duke, it’s a no-brainer that this line-up would go on to be a favorite among fans. The musicianship and chemistry of the personnel blended so well together with the material Frank was writing. It would prove to be a golden period in the history of Frank Zappa and these Halloween shows are proof.”

Band members Ruth Komanoff Underwood and Ralph Humphrey both provide some fascinating insight into what it was like to play with Zappa and some insightful history about these shows in the in-depth liner notes which also feature beautiful live shots and intimate backstage photos. Underwood details Zappa’s desire to constantly change up the musicians he worked with and states, “Frank, though, wasn’t looking back for a moment, but only characteristically ahead, relishing the excitement and challenge at hand. Personnel changes had become routine for him, and he thrived on the new musical possibilities and mix of personalities. It was evident, then and always, that Frank needed to live his life in a state of perpetual transition, a reality that could be as maddening to us as it was exciting for all. However unnerving these constant changes, the exertion made us better players, despite some figurative bumps and bruises.”

These concerts would be the only Halloween shows that Zappa performed in Chicago as the Halloween tradition would start the next year in NYC in 1974 and continue for the next decade. These shows would have the same unbridled, celebratory spirit of the NY gigs that David Fricke of Rolling Stone hailed as “advanced, instrumental ecstasy, cliff-edge improvisation and impromptu theatrical hijinks.”

1. The History Of The San Clemente Magnetic Deviation 1:50 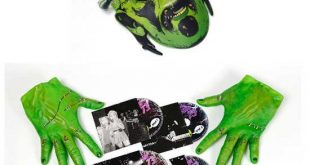