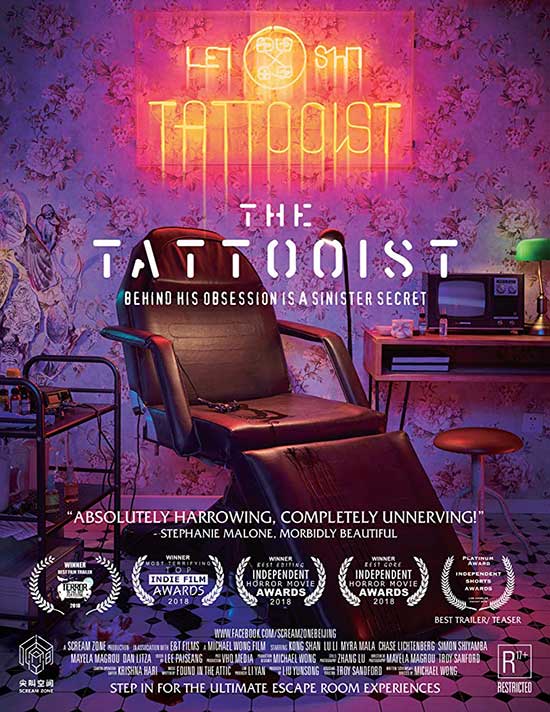 Behind the acclaimed work of a renowned tattoo studio lurks an unimaginable evil.

More short films, kiddies! Today we have THE TATTOOIST, a first-time horror from writer/director  Michael Wong. Mr. Wong works primarily in China and  is the director of a feature length drama called THE STORY OF 90 COINS.

A skeevy tattoo parlor, in a hole in the wall shop, where a super talented artist (Wang Yanhu) charges top dollar for his unique and incredible creations. However, money isn’t the only thing you’ll pay for his services.  There’s more than ink flowing in the back rooms. 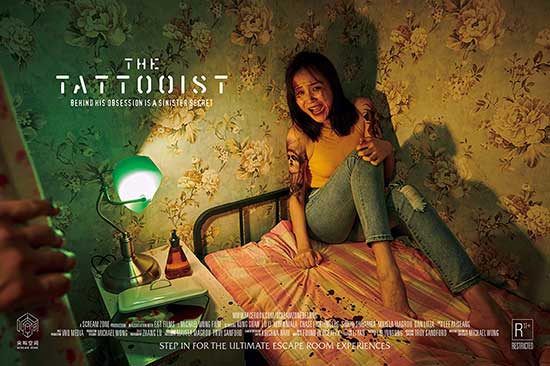 SO this is actually more of a teaser trailer than a film. Literally, all you get is a set up and some brilliant flashes of the promised gore and torture. It all looks great. The trailer has boatloads of awards from international film festivals (12 wins and 21 nominations).  I assume a feature is in the works based on this trailer

A few interesting bits of trivia – In the trailer, we see Wang Yanhu tattooing a patron identified only as “Platinum”. She is played by a real-life tattoo artist named Li Lu. In fact, both Li Lu and Wang Yanhu are actually tattoo artists in the real world (from the LeiShi Tattoo Studio in Beijing) and this is their very first film EVER.

Another fun fact is that everything seen in the trailer is filmed at the Scream Zone Escape Room, also located in Beijing. All the events portrayed are filmed on the actual sets and stages of the attraction. Looks like a pretty cool escape room. May have to take a trip and check it out sometime.

Really good choice for the score for the trailer. Composed by Panaqiotis E. Tsafos, we are treated to a rockabilly/jazz tap, uptempo instrumental called “Found in the Attic” It sets the stage so perfectly.

I really hope there is an actual feature coming based on this short because it looks so freaking awesome.  If this is all we get, well…that would be a shame but I have all the love for this state-of-the-art grindhouse slaughterfest.