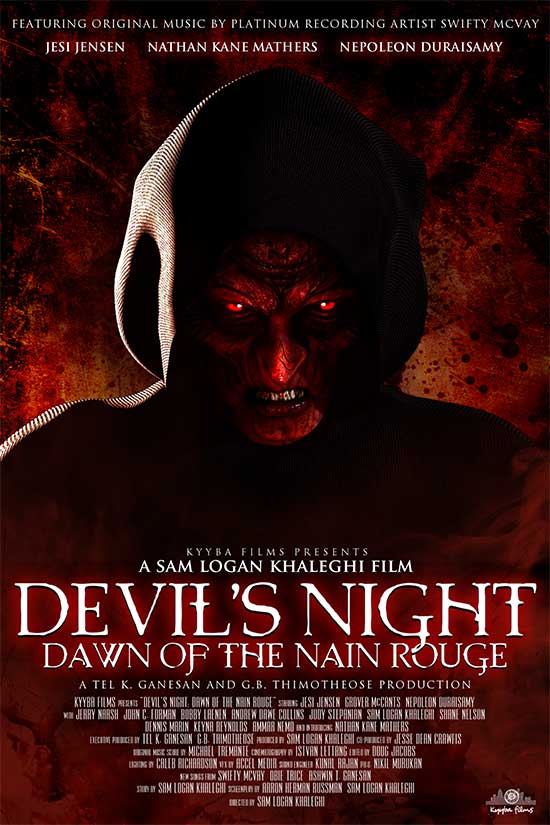 The Creature is Unveiled on this One Sheet!!! – Got a glimpse of the first OFFICIAL look at the ‘Nain Rouge’ creature from the upcoming horror/crime thriller ‘Devil’s Night: Dawn of the Nain Rouge’ … the one sheet attached is for Eminem’s brother NATHAN MATHER’S feature film debut as he is listed as ‘Introducing Nathan Kane Mathers’ in the credit block …

The Nain Rouge is a fictional creature of folklore (Comic book fans may remember the Motown urban legend which was also borrowed by Marvel for inspiration of a great lakes Avengers villain at some point) which has never been on screen before.

Eminem’s little bro has to finally show his acting and rapping chops alongside his big brother’s former D12 group mates Swifty McVay (who plays a corrupt Detroit city mayor) and platinum artist Shady recording artist Obie Trice, who just dropped a new music video for the film this summer called “Phoney” alongside a music video on Vevo … Nathan plays an Army sergeant turned small town Detective who has to solve a series of murders and the film has been described as Fincher-Esque looking crime/horror film.
The movie which was previously in post-production limbo (a la ‘New Mutants’, the teaser trailer was released over a year and half ago) is set to get a new trailer this month and begins hitting the film festival market later this year with a series of red carpet premieres in October in NYC, LA, Nashville and Detroit.
Teaser Trailer Link that was just released this morning on the directors social media page. The film is directed by Emmy nominee, Sam Logan Khaleghi who also co-stars alongside Mathers.
Share