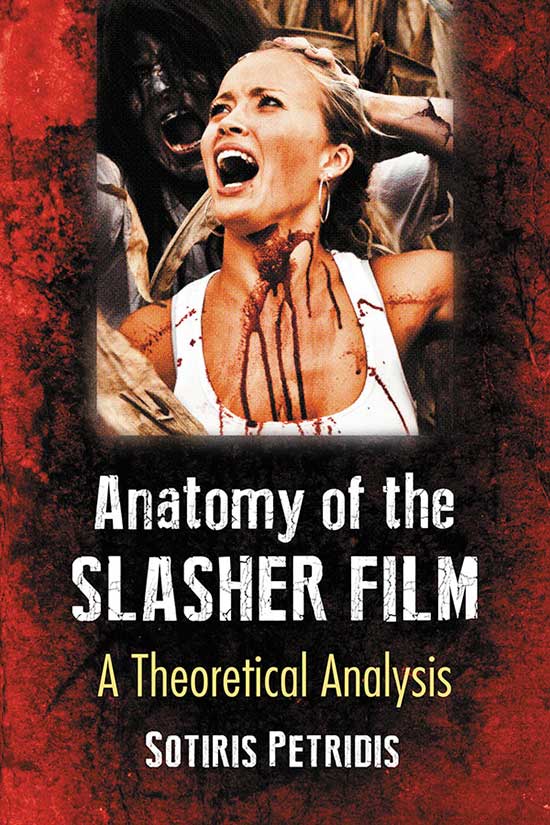 Anatomy of the Slasher Film:

The New Holly Book of the Subgenre

The term “slasher film” was common parlance by the mid-1980s but the horror subgenre it describes was at least a decade old by then – formerly referred to as “stalker,” “psycho” or “slice-’em-up.” Even if slasher film is a very well-known and popular horror subgenre, it rarely has been analyzed as a whole. The most common approach of the subgenre is the one of Carol J. Clover’s in which the famous term Final Girl was conceived. Clover’s approach, as most of the books and articles regarding this subgenre, are dealing with the classical slasher films of the 1980s and the postmodern trend of the 1990s. Even if slasher film has almost four decades of active presence, no one has tried to study its narrative structures and its progress through its history. No one until now.

Sotiris Petridis, the author of the book Anatomy of the Slasher Film: A Theoretical Analysis, tried to examine the structure of the slasher films’ narratives and create a concrete approach that can be used in every film of the subgenre, no matter the decade of its production. Examining 74 movies, from The Texas Chainsaw Massacre (1974) to Texas Chainsaw 3D (2013), the author identifies the characteristic elements of the subgenre while tracing changes in narrative patterns over the decades. Based on the results, Petridis divides the slasher canon into three eras: the classical (1974-1993), the self-referential (1994-2000) and the neoslasher cycle (2000-2013). The book is available for sale in both print and electronic versions.

Amazon Page of the Book: www.amazon.com/Anatomy-Slasher-Film-Theoretical-Analysis