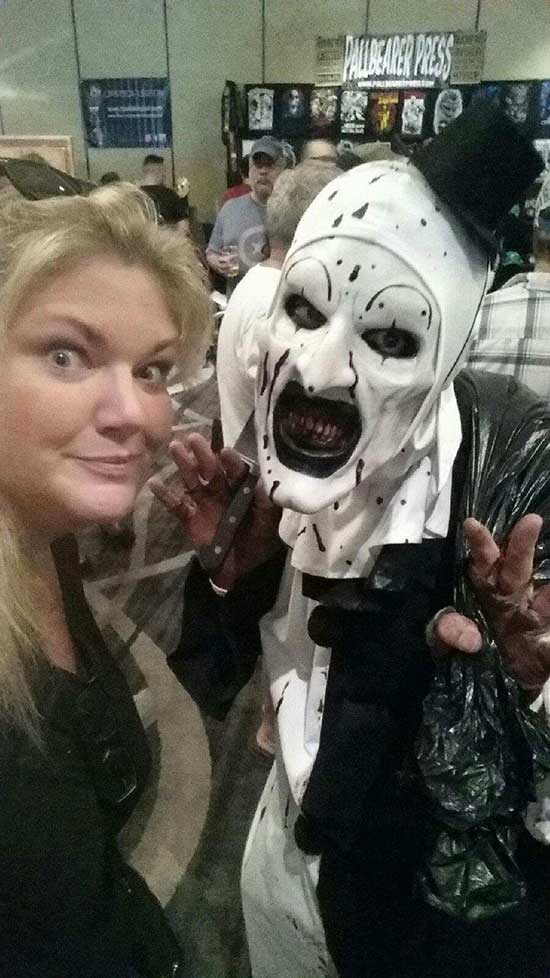 Summer is winding down. It is that time of the year again…. Monster Mania 43 in Cherry Hill, New Jersey. The Horror icons come out to play. Fans from all over this beautiful planet come to meet the people that they have looked up to. The Crowne Plaza Hotel is the home for Monster-Mania. It is run by the Hagan family. If you were checking in today, you may have spotted Doug Hagan and of course the man, the myth, the LEGEND Dave Hagan was lurking about the floors. The guest list included: Clive Barker, Robert Englund whom is a fan-favorite. His line never seems to end. Ron Perlman who is probably one of the coolest humans ever.

Shawnee Smith (“Saw 1-4”, “The Grudge 3” and so many more) there was JIGSAW mayhem as people dressed like the infamous JIGSAW AKA Billy. Shawnee is beyond kind and everyone said nothing but kind words about her.

The incredible Lance Henriksen (“Aliens”, “Scream 3”, “The Terminator”, “Near Dark”) this man has been in so many great films. He is a class act and if you have not had a chance to meet him. You should meet the man.

Skeet Ulrich who made “Scream” in 1996. From then on…. It was history. He portrayed Billy Loomis and the fans were in full-on SCREAM mode. Quotes, people dressed up and a lot of people requesting his, Norman Bates quote, “We all go a little mad sometimes” on photos. Skeet is doing a great job in “Riverdale.”

James Hong. The legendary James Hong was dressed as his character Lo-Pan from “Big Trouble in Little China.” There were fans dressed like Jack Burton (Kurt Russell) and Gracie Law (Kim Cattrall) from the film. Fans waited with anticipation for him to return to his table during photo-ops.

A fan and family fan favorite, Kathy Najimy who smiled and laughed and was delightful to everyone. “Hocus Pocus” is a must for those of who love Halloween. It has since become tradition although some of us watch it all-year round. (And All Horror movies.)

Danielle Harris, another fan favorite. She is kind and funny. She has been in everything from “Halloween 4-5”, “Urban Legend”, “Hatchet 1-2” and more.

The legendary Tony Todd (“Night of the Living Dead”, “Hatchet 1-2”, “Candyman”, “Wishmaster”, “Platoon”, “Star Trek: The Next Generation” and so many more including theatre.) 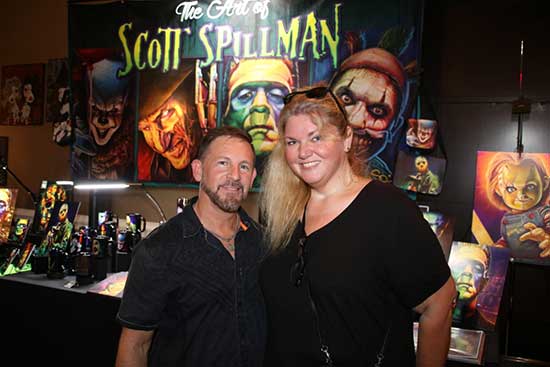 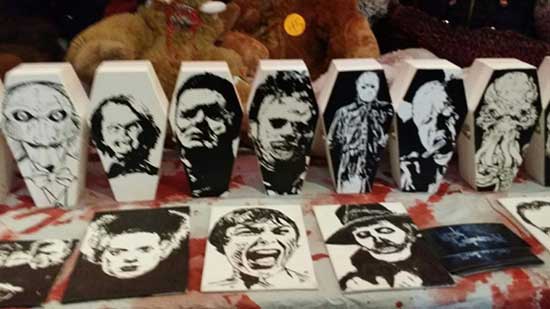 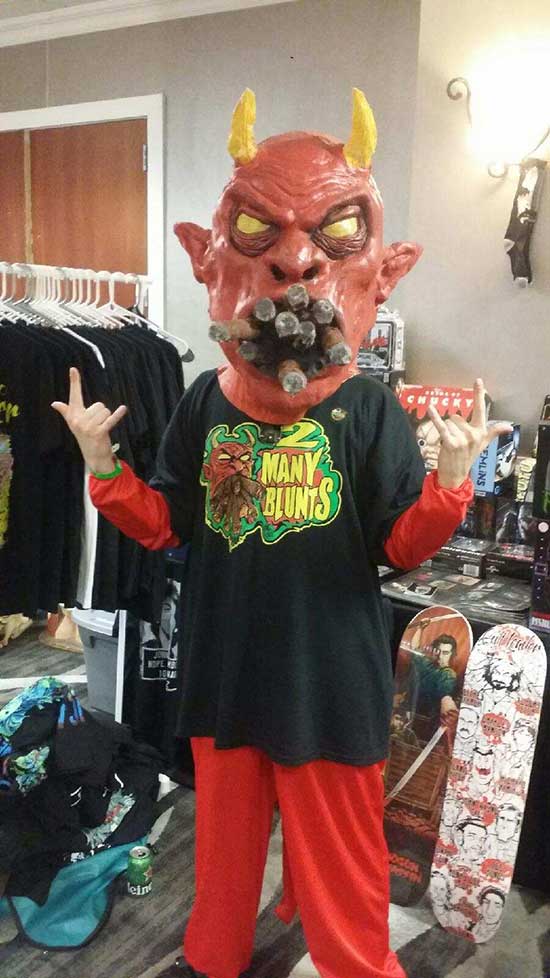 The Cenobites from “Hellraiser.” Nicholas Vince, Simon Bamford and Barbie Wilde. Fans were so excited. I spoke with several people who were excited to get posters signed and talk with Doug Bradley.

Now the man who also has a line that never ends. Fans from everywhere. Grown-ups, kids…. It has been determined that just about everyone loves KANE HODDER. He makes jokes, he talks to everyone. He is truly a talent. If you haven’t read his book, “Unmasked: The True Life Story of the World’s Most Prolific Cinematic Killer,” you should read it. It tells his story. It was written by Kane and Michael Aloisi aka Author Mike. His film, “To Hell and Back: The Kane Hodder Story” is incredible. You can also check out “The Killer & I” by Michael Aloisi. Kane Hodder and Tony Todd are two actors that truly go above and beyond.

Steve Nappe (“Death House”) also appeared. He is a great man to talk with.

Joey Lauren Adams (“Chasing Amy”, “Mallrats”, “Dazed and Confused”, Big Daddy” and more) also appeared. She was very kind, sweet. She is a fan favorite. Her characters have become cult classics and she listened to quite a few stories and people walking around randomly talking about “Chasing Amy.” People would tell you a quote or a part in the film that truly tugged the heart strings.

One of the founding fathers of horror and all-around awesomeness, Lloyd Kaufman made an appearance. He is a producer, director and writer.

We were blessed by the appearance of Father Evil. I remember meeting Father Evil through my Uncle. (Author Nick Kisella) I thought, this man is so original. This character is brilliant. He created this by himself. Check out his official site, www.fatherevil.com/   He is one of a kind. He has a huge heart and he had his beautiful family with him today. 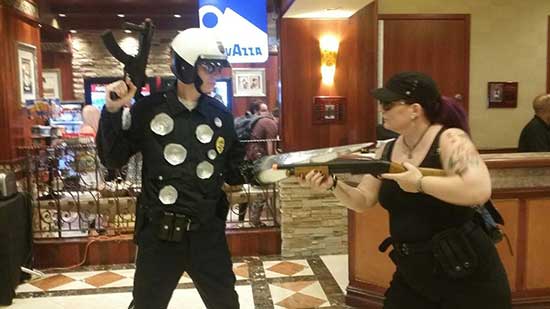 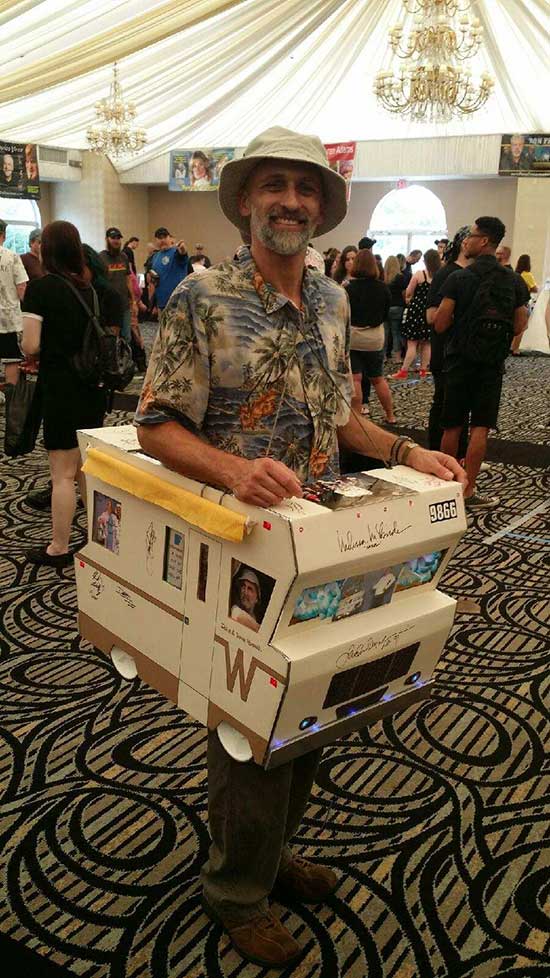 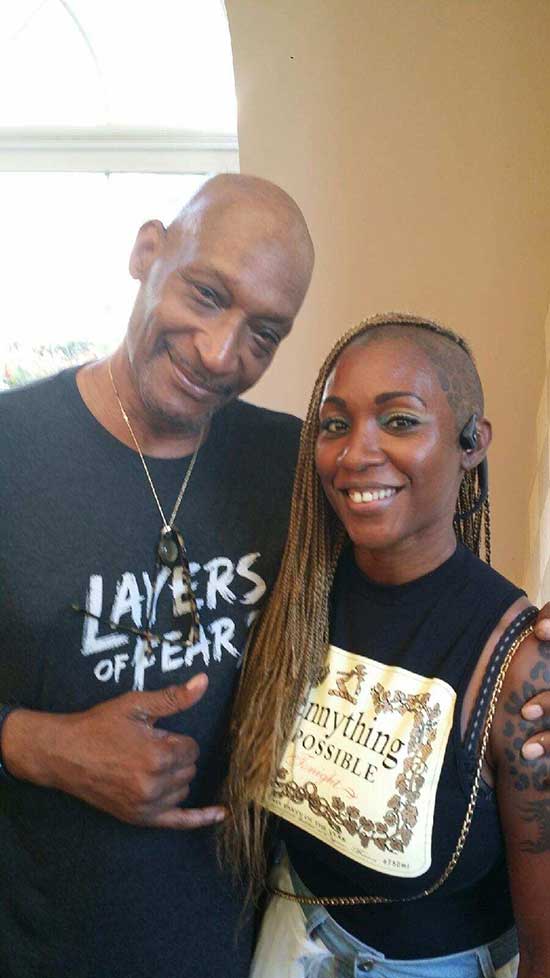 The talented Artist Scott Spillman @spillman68 on Twitter had his artwork for sale. He is such a talented artist. His work is unique. His talent is insane.

Working away in the vendor room was our legendary Horror Show Jack Fangsmith. Making fangs and surrounded by his own incredibly horrifically works of art. @horrorshowjack  www.facebook.com/HorrorShowJackFangSmith/ Helping Jack out at his table was another talented Artist, Nelson Mas. @GeekEmporium.NYC on Instagram.

Nelson had several cool drawings and talked a little bit about his work. You can check out his Etsy Store: GeekEmporiumNYC

Also, the talented Ian Fetterman whom has @ianspumpkinscarvings – this man has some serious talent. They had so many talented artists and vendors. This show is about so much more than just meeting these people who portrayed unforgettable characters. Monster-Mania is about family, friends and seeing the people you might not have seen in a while. You instantly reconnect and start talking. You make new friends, you meet up with old friends, familiar friends and people who have become family over the years. Monster-Mania has brought so many of us together. The Horror community is one of the strongest out there. The nicest people you will ever meet. 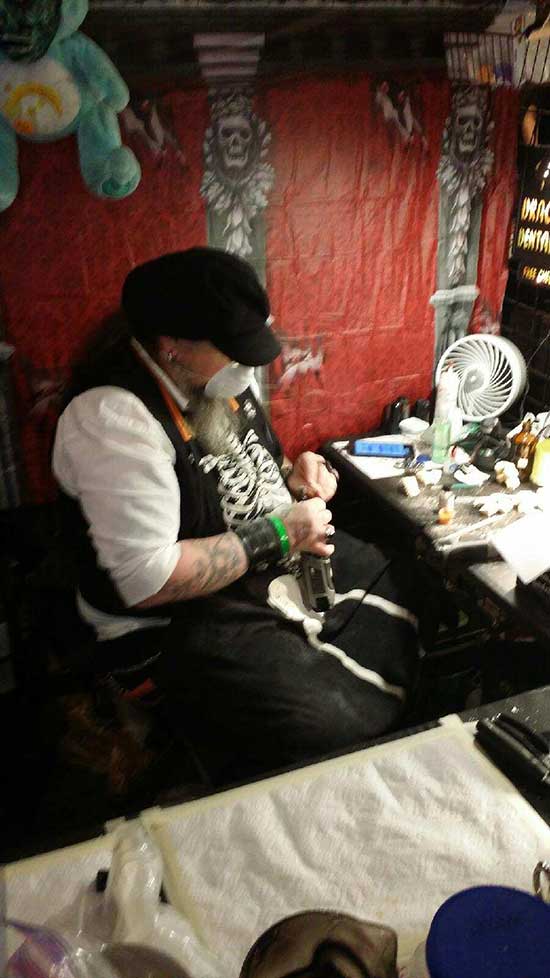 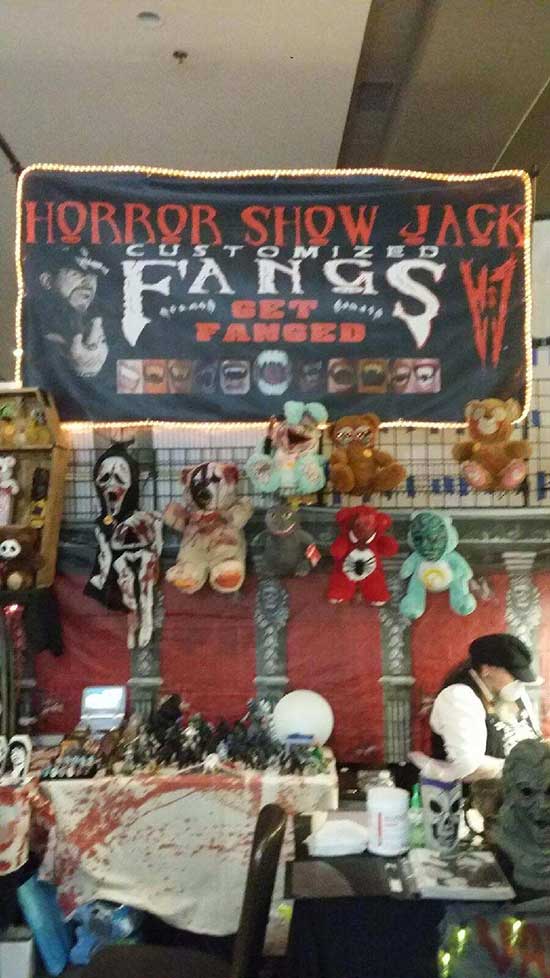 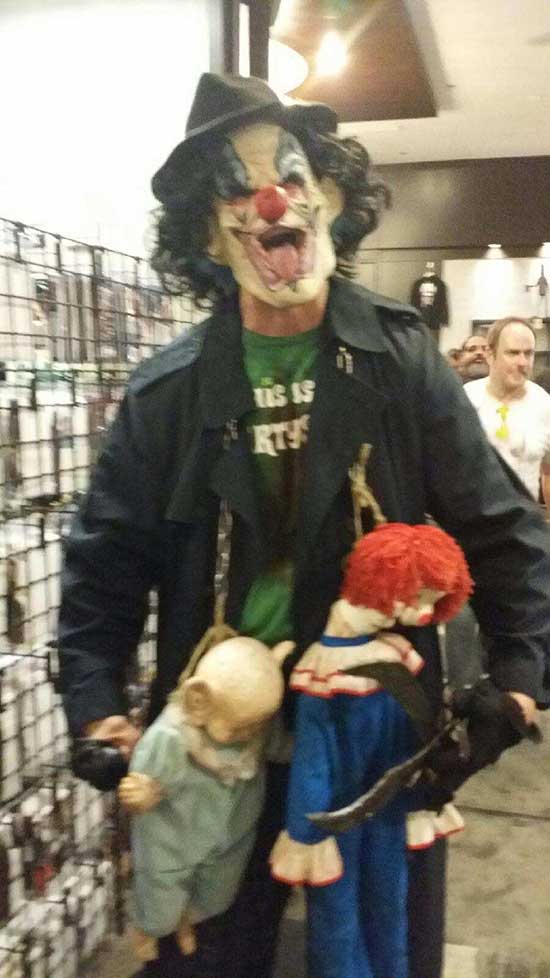 (Shout out to all the new people. Preston and the guys from Boston, all the artists. The Hagan family for another amazing convention.) 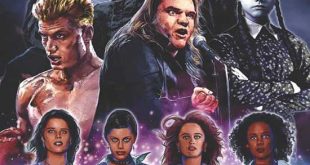 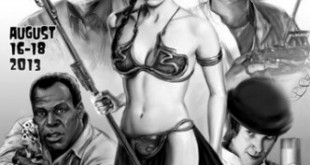