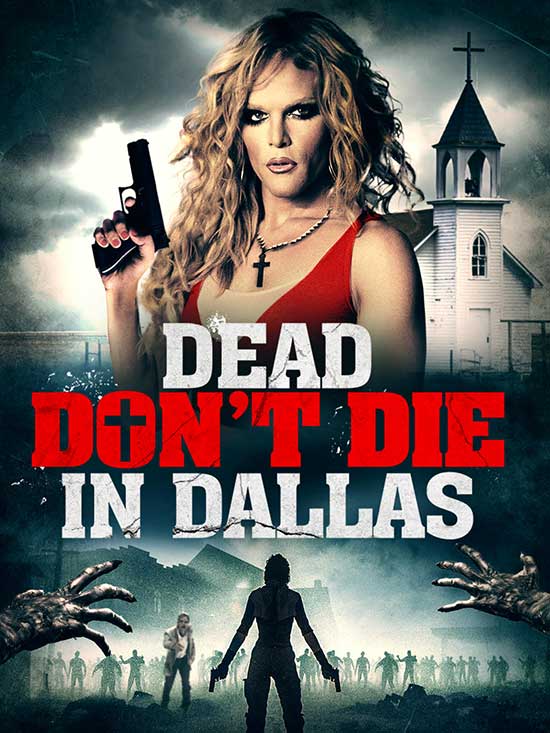 The long-awaited cult film, “Kicking Zombie Ass for Jesus” will be available under a new name this September.

the long-awaited companion piece to Israel Luna’s 2010 cult classic, “Ticked-Off Trannies with Knives” has finally arrived! Previously titled, “Kicking Zombie Ass for Jesus”; after gaining mainstream distribution for the film, the title has since changed to “Dead Don’t Die in Dallas”. The film will be released on DVD to Walmart and online retailers such as Amazon on September 3, 2019. “Dead Don’t Die in Dallas” stars Willam Belli (“A Star is Born”) as Beth-Anne Fetterman, a transgender hairdresser who battles for survival up against a transphobic preacher in post-apocalyptic West Texas, after a miracle pill intended to cure all infectious diseases, turns the people who took it into flesh-craving mutant zombies.

Luna, an openly gay filmmaker from Wellington, Texas made the film as a creative response to the homophobic and transphobic messages made by religious people over time. While covering religion and other topics, Israel says the film isn’t “pro-gay” or “anti-religion” and that it’s a movie for everyone. Also starring alongside Belli is: Krystal Summers (“Ticked-Off Trannies with Knives”), Richard Curtain (“Fright Flick”), and introducing Angel Martinez as Philomena the “tough-as-nails lesbian with a shotgun”. Martinez who at the time was lesbian has since transitioned into a male.

Backstory on the Film
Dead Don’t Die in Dallas was filmed over the course of seventeen days in cities throughout Texas back in 2013 after a successful IndieGoGo campaign raised the funds (7,200 dollars) to secure the basic needs for filming (travel, lodging, food, etc.). An additional 150,000 dollars was put towards the film once Luna got a distribution deal with ITN and CalTex Films, LLC. Those funds were used for special effects editing on the project. The movie was completed in 2017 with a handful of successful screenings over the past two years; with the reasoning for the then-unknown release being Israel’s rising popularity in the Dallas/Fort Worth film scene. He has since worked on numerous film projects for other filmmakers, launched his own film festival competition (Rack Focus), and has his own movie studio! Watch the official trailer here: