Home | Mondo Macabro’s October 2019 Release of KILLER OF DOLLS – First ever U.S. release for this lost classic of Spanish horror.

Mondo Macabro’s October 2019 Release of KILLER OF DOLLS – First ever U.S. release for this lost classic of Spanish horror. 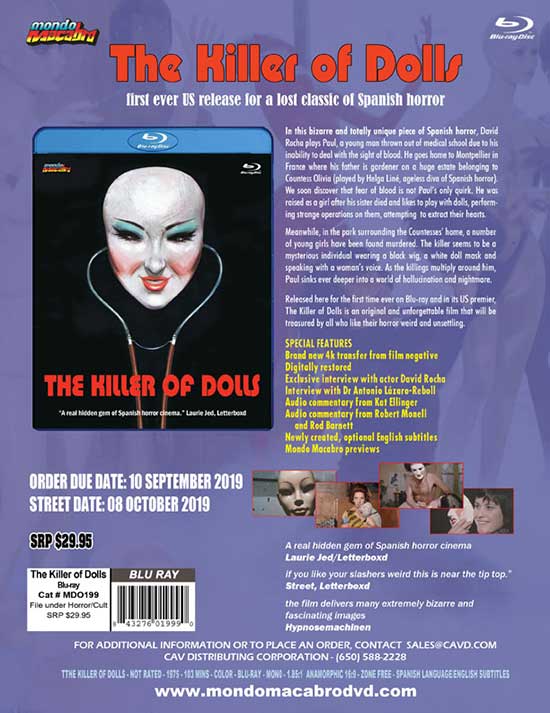 In this bizarre and totally unique piece of Spanish horror, David Rocha plays Paul, a young man thrown out of medical school due to his inability to deal with the sight of blood. He goes home to Montpellier in France where his father is a gardener on a huge estate belonging to Countess Olivia (played by Helga Liné, the ageless diva of Spanish horror). We soon discover that fear of blood is not Paul’s only quirk. He was raised as a girl after his sister died and likes to play with dolls, performing strange operations on them, attempting to extract their hearts.

Meanwhile, in the park surrounding the Countesses’ home, a number of young girls have been found murdered. The killer seems to be a mysterious individual wearing a black wig, a white doll mask and speaking with a woman’s voice. As the killings multiply around him, Paul sinks ever deeper into a world of hallucination and nightmare.

Released here for the first time ever on Blu-ray and in its US premiere, THE KILLER OF DOLLS is an original and unforgettable film that will be treasured by all who like their horror weird and unsettling.